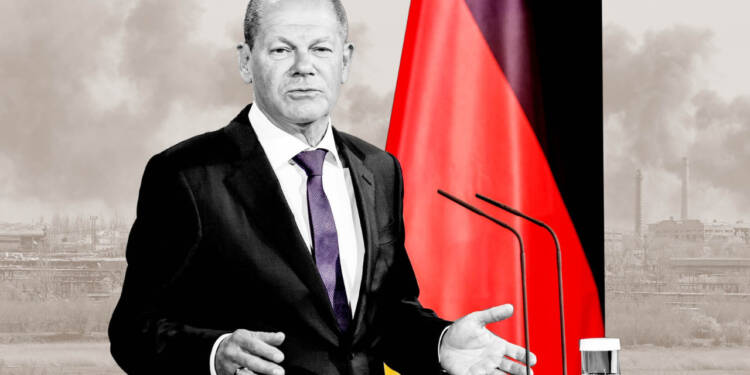 What if I say that Germany, the EU’s biggest economy, will be responsible for the bloc’s collapse within the next 5 years.

The fiscal policies that Germany has adopted to fix its economy are simply brilliant. It will upend the sorry state of the German economy, no doubts about that! The only problem is: It will destroy all other European economies, including big guns like France and Italy.

Germany is building a defensive shield for its economy. To shield Germans from hyperinflation, rising unemployment and deteriorating living standards, a giant defensive shield worth $200 billion is being set up by the Olaf Scholz administration. But what comes as a “shield” for the Germans can very well wreak havoc on Europeans of other nationalities.

Olaf’s plans to save the German Economy

Germany plans to use the $200 billion fund to provide subsidies to its people and businesses. The shield is designed to keep energy prices artificially low by putting brakes on gas and electricity prices, reducing taxes on gas, as well as promoting investment in renewables. Scholz is obviously lauding this policy as a game-changer for the German economy. He recently said, “it is good news for all who are looking with concern at rising costs.”

He is actually making sense here! There is hardly any nation in Europe which is yet to feel the heat of rising inflation, throttled gas supplies and “de-industrialization.” In fact, the US has played a key role in facilitating the exodus of businesses from Europe. Gas prices in US are comparatively low, and with the legislation like US Inflation Reduction Act (IRA), the Biden administration is allegedly ensuring to turn the US into a magnet of sorts for disgruntled and frustrated European companies.

$200 billion fund: a shield or an economic strike on fellow EU nations

So, Germany has all the rights in the world to create a counter plan to the American ‘De-industrialize-Europe’ plan. But here is why other European nations might see this plan as a finger in their eye. As Polish Prime Minister Mateusz Morawiecki rightly put it, the subsidies will give German companies an unfair advantage over their other European counterparts. He said, “The richest country, the most powerful E.U. country, is trying to use this crisis to gain a competitive advantage for their businesses on the single market.” With massive governmental subsidies, companies in Germany will be able to produce goods at low production costs. This will drive companies from other European nations (other than Germany) out of business and hammer their finances.

In fact, Italy’s super-Mario, Mario Draghi has also criticized the plan. He had said, “Faced with the common threats of our times, we cannot divide ourselves according to the space in our national budgets.”

The other important point raised by Grid News is that the massive subsidy plan of the German government can de-incentivize Germans from fuel conservation. With subsidies helping the government cap gas prices, 84 million Germans will obviously spend more on gas, burn more fuel and further squeeze supplies for other Europeans. This will exacerbate the inflation problem in other nations, and again, drive their corporates out of business.

Mind the fact that no other economy in EU can match the sheer size of the German economy, and therefore, their ability to spend Euros on their respective subsidy programs is also limited. What Germany will do will surely have a devastating impact on all other European countries. Small European economies of the South will feel the pain in particular.

This is a race for subsidies that small EU economies are destined to lose. Grid quotes Andrews from the Gavekal group as saying, “Italy, for example, is much more under pressure in terms of budgetary spending.” Similarly, Greece would also be among the worst affected countries. Countries in the Baltic and Balkans will also feel its heat. Simply put, the EU will be divided like never before, and half of the EU economies will be pushed into an economic catastrophe of a size never seen before.