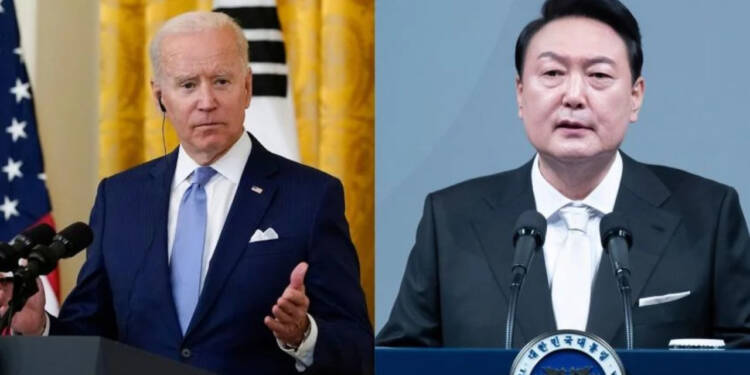 South Korea has rubbed Biden the wrong way. Biden’s immense lust to fuel the Ukraine war has been watered down by Seoul. The United States’ alliance with South Korea is withering down every day. And it’s only Biden to be blamed for it.

One of the most crucial ties for the United States, both in Asia and globally, is its ties with South Korea. However, after the Biden administration came to power, the alliance has seen continuous conflicts. As the collaboration between the United States and South Korea approaches its eighth decade, the Biden administration has put the alliance’s integrity in jeopardy to achieve its nefarious geopolitical objectives.

According to a US official, the US is looking to purchase 100,000 howitzer artillery rounds from South Korean manufacturers to help Ukraine. The intention of the US government is to support Ukraine’s counter-offensive efforts against Russia. Ukrainian authorities are pressing for more weaponry and assistance from the US and Western allies.

Additionally, it relieves worries among the US military, particularly the Army and the Marine Corps, who were concerned that ongoing deliveries of howitzer ammunition from the Pentagon to Ukraine were depleting their own stockpiles.

Other defence officials endorsed the contract’s general terms and stated that it will ease stockpile pressures, particularly with regard to the howitzer ammunition that Ukrainian forces have been consuming heavily. A defence official told reporters last week that Ukraine was using up to 7,000 rounds of ammunition every day.

Seoul till now has helped the Ukrainian military with helmets, bulletproof vests and other non-lethal military equipment in addition to medical supplies. It has refused to supply lethal weapons to the European country.

In a statement, the South Korean Defense Ministry acknowledged continued discussions over the transfer of an undefined quantity of 155-millimeter artillery shells to supplement dwindling US stockpiles. The ministry asserted that the negotiations are going forward with the assumption that the US will be the “end user” of those rounds and that Seoul will maintain its principle to support Ukraine but only non-lethally.

Just a few days ago, a report by Czech daily iDnes claimed that the Chiron man-portable air defence system (MANPADS) from South Korea is about to fall into the hands of the Ukrainian military. The report threatened the South Korea’s relations with Russia. It was so serious that South Korea’s President Yoon Suk-yeol himself had to clarify that nothing of this sort was in motion.

Yoon Suk-yeol emphasised that he won’t do anything that would harm the relations between Seoul and Moscow. “I’d like you to know that we are trying to maintain peaceful and good relations with all countries around the world, including Russia.”

The West especially the US has been embroiled in fuelling the war in Ukraine indirectly. They have sent weapons worth billions of dollars and are planning to send more. The Biden administration’s geopolitical game has already caused turmoil around the globe, and now it’s harming its relations with the closest of allies. Despite refusal of South Korea to help Ukraine, Biden administration is perturbing Seoul relentlessly for weapons. However, Yoon Suk-yeol is not any European leader who’ll give away to Biden’s demands. It once again has rejected Biden’s nefarious plans to fuel the war in Ukraine.