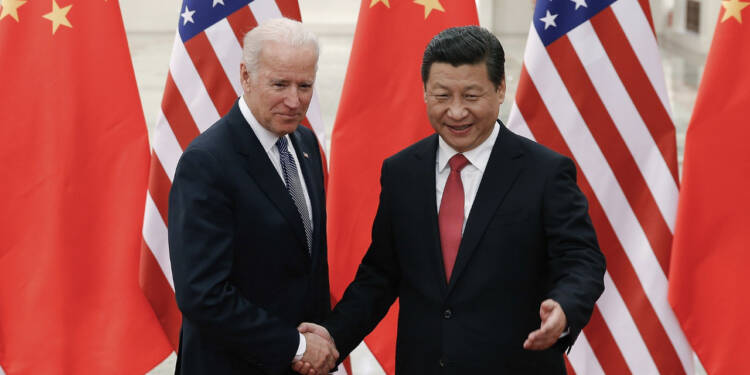 Biden Jinping meeting: The confrontation between Russia and Ukraine has also raised an important issue of Taiwan. With China’s military and economy seeing an immense growth in recent past, western powers have been concerned that China may soon invade Taiwan like Russia invaded Ukraine.

On the pretext, Biden Jinping upcoming meeting may seem like to be for Taiwan but it’s actually for Putin.

China has supported Russia amidst the Ukraine war. CCP has followed everything in this whole Ukrainian episode very minutely. As CCP eyes on Taiwan, it has started taking pre-emptive steps to shield its economy from any similar steps by West as they did against Russia. It wouldn’t want its trade to be halted as that is where its soft power comes from. Many people were taken aback by recent words made by U.S. President Joe Biden in the wake of the CCP’s 20th National Congress, which made it abundantly obvious that the CCP will not abandon its goal of annexing Taiwan, even if it means using force.

In order to prevent U.S. and Chinese interests from conflicting, President Biden stated at the White House on November 9 that he hopes to meet with Chinese President Xi Jinping. While confirming his presence in Indonesia, Xi has not yet reacted to the invitation but has a clear opinion in favour of the island’s independence.

In October at the CCP’s most significant political gathering, Xi stated, “The resolution of the Taiwan issue is the Chinese people’s own affair, and it is up to them to decide.” Xi made this statement during the congress. Despite the fact that the CCP has never governed the island nation of Taiwan, he continued by saying he intends to “reunify” it.

In August, the arrival of Nancy Pelosi, the speaker of the House and one of the highest officials in the United States, sparked a number of responses and warnings from the Chinese side. Chinese Foreign Ministry warned, U.S. lawmakers who “play with fire” on the Taiwan issue “will not come to a good end.” Additionally, it had warned that if she [Pelosi] insists on going, there will be terrible consequences.

Also Read: Go easy; The Taiwan showdown between Biden and Xi is staged and pre-planned

Putin is the real deal

On the exterior, the upcoming Biden Jinping meeting could appear to be for Taiwan, but it’s really for Putin. According to well-known Russian opposition figure Kasparov, Xi may have a “Putin for Taiwan” agreement with Biden as he looks to invade Taiwan. Further this year, Xi wished Tajik President Emomali Rahmon on his 70th birthday, but he did not wish Putin on his birthday. It was a clear indication from Xi Jinping to Putin. And more recently, Xi stated that China is open to talks with the United States on crucial matters like Taiwan and Russia.

At the CCP’s 20th National Congress, Xi Jinping secured ultimate power, and it is obvious that he won’t cede it. The so-called “Taiwan unification” line serves as the basis for this power. Xi Jinping can offer Biden a deal: if “the CCP does not support Putin, the U.S. must hand over Taiwan,” Kasparov said, emphasising that the CCP cannot assume control of Taiwan without coming into war with the United States.

Given that Taiwan is important to the CCP and that Xi Jinping is assuming that Putin would lose, giving Putin in exchange for Taiwan is what he intends to do. Further, China doesn’t want sanctions which Russia is dealing with because of the dire state of economy at the moment. It’d be interesting to see if Biden accepts the offer. Taiwan is the world’s largest producer of semiconductors and is now a vital part of American industry due to its involvement in geopolitical and economic challenges.

This economic treasure will strengthen the CCP if it ends up in its possession. Additionally, the CCP would have the chance to conquer East Siberia and the Far East of Russia should Russia succumb. Is Biden stupid enough to economically harm United States and give away Taiwan to win over China? Time will tell.