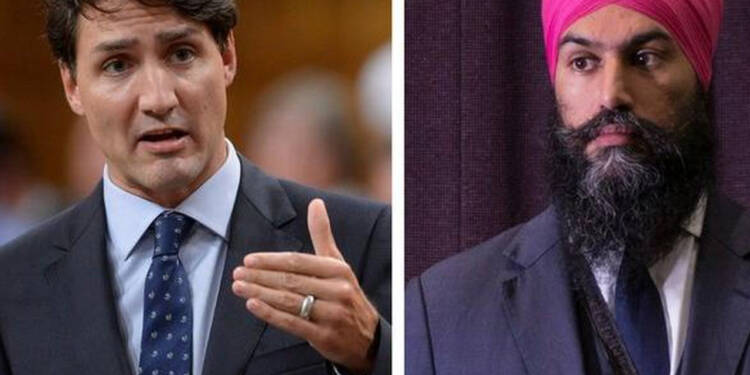 Justin Trudeau’s liberal minority government holds on to power and that is all because of the voter base it shares with the Jagmeet Singh-led NDP Party. The two parties vowed to back each other until 2025 so that the minority liberals could stay in power. The leaders of the parties share a bonhomie but have you ever thought why an ally of Justin Trudeau will dig his grave? Why is Jagmeet now at odds with his own ally Justin Trudeau? Perhaps, the Tiktok star has something going on in his head that his friend Justin is too naive to understand.

If we talk about the United States, the country holds a bi-partisan system, unlike Canada where the liberals, the conservatives and the democrats are rushing to clinch power. However, the liberal party and the NDP came together to form a coalition government which is bound to benefit the minority liberals until 2025 but little did they know that the Democrats are playing a political game.

Justin Trudeau knows his party is holding on to power with the support of the New Democratic Party. Therefore, he is always in a cold sweat even at the thought of the NDP breaking up with the federal liberals.

Not to mention, a tussle is brewing up between the two allied parties and they don’t seem to be able to govern together. In recent times, there have been ample instances when both parties were seen taking on each other. Cellular networks, inflated food prices, hefty party spending and whatnot. Even the contentious ‘Arrive can’ app has become a bone of contention between the two.

Amidst this tussle between the two, a conservative wave is sweeping across Canada, and we know the liberals and NDP coalition is struggling to keep its feet firmly on the ground. More and more Canadians are realizing now that their country needs conservative leadership to fix Canada, which is giving nightmares to the coalition. The NDP’s traditional vote bank is slipping from its hands, so it’s bound to experience rainy days ahead. And, Jagmeet Singh does not want that to happen.

Read More: A public spar breaks out between NDP and Liberals over $54 million ArriveCAN scam

Evidently, whenever the people of Canada and the opposition start pointing fingers at the Liberals for their mishandling, NDP leader Jagmeet Singh also never falls behind. The leader has the audacity to go vocal against his own ally because he wants the liberal party to lose its clout with the NDP in the assembly.

Yes, the NDP is attempting to completely destabilize Trudeau’s party. You see, the NDP has been digging Trudeau’s grave by highlighting the issues that Canadians are facing. All of a sudden, Jagmeet is donning the cloak of a samaritan and bashing the federal liberal party for its failed adventure. But, why is he doing that? because he wants to garner the support of the minority liberals and realize his dream. We know both parties share a common voter base, and if the liberals happen to see a decline in their approval ratings, then the NDP is certain to benefit. Jagmeet Singh wants to eat up the voter base of the liberal party and clinch power by completely wiping out Trudeau’s liberal party.

Read More: Jagmeet Singh is playing a clever game to use conservatives to storm to power

The country has been reeling under a series of severe crises ranging from health to food, and the federal party has failed miserably to tackle the situation. This has dealt a severe blow to the party’s approval rating. And because the NDP is an ally of the federal liberal party, it is also facing the brunt of the voters’ attention. Due to this, the NDP wants to cut all ties with the federal liberal party once and for all. Therefore, it might not be wrong to say that the NDP is using the liberal party’s failure to storm to power and grab a spot in the assembly alongside the conservatives.

As OPEC+ shows its valour against USA, Biden reads riot act for UAE