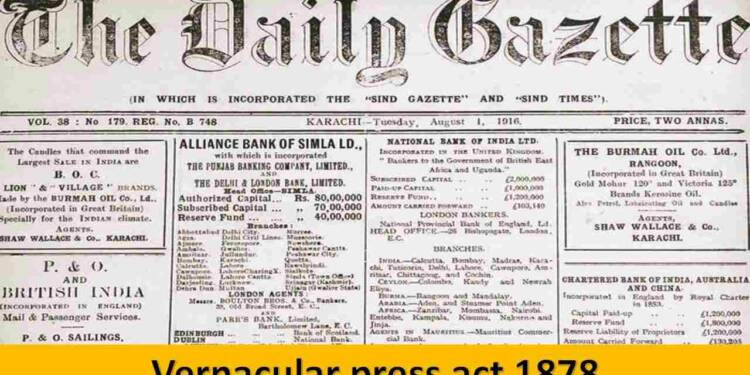 Vernacular Press Act: History and Effects of this act

The Vernacular Press Act was passed by the British Government in India in 1878 to place more tight control over newspapers and periodicals in Indian languages. At that time Lord Lytton was the Viceroy of India. In this act, there was a provision of strict action on the publication of such material in magazines, which was likely to cause disaffection among the public against the British rule. Actually this law was brought to suppress the vernacular newspapers. Amrit Bazar Patrika, published in Bengali from Calcutta, transformed itself into an ‘English daily’ the very next day after the passage of the Swadeshi Press Act. Its editor was Sisir Kumar Ghosh.

Hundreds of vernacular newspapers and periodicals were confiscated under this act. Locks were put in the press. To awaken national consciousness among the countrymen, the writer Bankim Chandra Chattopadhyay (1838-1894) brought Vande Mataram of ‘Anand Math’, which became the reason for the anger of the British rulers. Many copies of ‘Anandmath’ were burnt by inciting the Muslims.

The Vernacular Press Act became very infamous and after the change of government in England in 1881 was repealed by Lord Ripon and the old law of 1867 was continued. The Indian Newspaper Act, 1910E was brought by the British Government to re-establish control over Indian newspapers, reviving all the deprecated provisions relating to the Vernacular Press Act.

FAQs about the Act

Who passed the Vernacular Press Act in 1878?

What is the other name of Vernacular Press Act?

Another name of Vernacular Press Act was “gagging Act.”

What did the Vernacular Press Act do?

To prevent the vernacular press from expressing criticism of British policies the act was intended. To stop, the opposition that had grown with the outset of the Second Anglo-Afghan War (1878–80). English-language publications is excluded from this act

Who reammend the Vernacular Press Act?

In 1881, this act was reammended by Lord Ripon. Among indians It produced resentment which became one of the catalysts given.