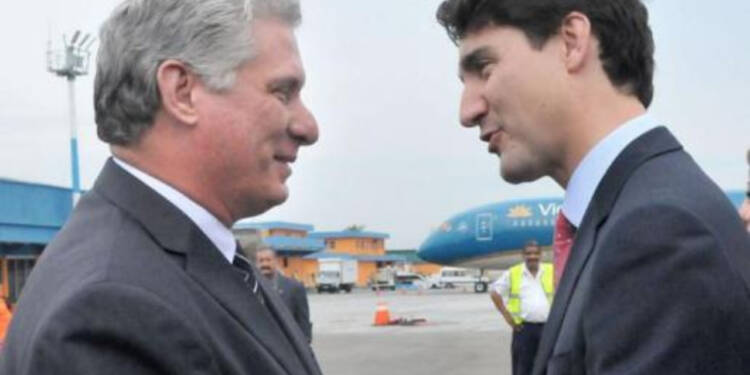 As a beacon of human rights and democracy, it is expected of a nation like Canada to call dictatorial regimes. If Canada can preach to the rest of the world, it should be able to preach to these authoritarian regimes. But be it China or Cuba, the Justin Trudeau-led Canadian government remains tight-lipped while calling them out.

Cubans are urging the Canadian government to impose sanctions on their oppressive regime, but Trudeau has turned deaf ears. In fact, the Trudeau family has always been aligned with the Cuban Communist government and has tried its best to spin events in favour of its tyranny. The government sided with the oppressor, but why?

A Cuban-Canadian rights group is formally requesting that Ottawa slap sanctions on officials in Cuba for Havana’s repression of demonstrators at a July 2021, protest. The anti-government protests in Havana, Cuba, last year, brought a horde of dissidents to the streets, marching through the cities of the island. They demand freedom from the oppressive, authoritarian regime and urge the government of Canada to listen to the demands of the people, to support them in their peaceful struggle for democracy, and to condemn — openly condemn — the repression, the wave of arbitrary arrests, the intimidation, in the same manner, they have done with the regimes in Venezuela and Belarus.

But, what did the Canadian government actually do? It opted for a neutral language. A language to not hurt its lovers running the Cuban communist regime. When asked for a statement on the protests, Global Affairs Canada issued a statement through spokesperson Ciara Trudeau. The department had not posted it with other statements on its website.

The statement declared support for “the right to freedom of expression and assembly” but didn’t point fingers at the regime in Havana. Instead, it called on “all parties to uphold this fundamental right.

There is a saying by Desmond Tutu that if in times of oppression, you choose to be neutral, you are taking the side of the oppressor. This is what the Canadian government actually did. It didn’t take any tough stance against the Cuban regime.

The Cuban people were not asking for medicine, or for COVID treatments; they were demanding an end to the dictatorship and an end to oppression. The Cuban people wanted democratic governments like that of Canada to stand with them while they struggled for democracy, but Trudeau instead took the side of tyranny. He sided with the dictatorship because, obviously, he did not want to hurt his lovers in Cuba.

So, the love story dates back to the era of Justin Trudeau’s father, Pierre Trudeau, who shared an affinity for former Cuban President Fidel Castro. Prime Minister Justin Trudeau’s personal and family history is believed to have influenced the country’s actions back then.

Reportedly, in 1960, during the earliest days of the Castro regime, Pierre Trudeau was rescued in the Straits of Florida while trying to paddle to Cuba. He was later derided by John Diefenbaker in the House of Commons for conducting his “love affair” with the Cuban Revolution “by canoe.”

In 1964, the elder Trudeau came back to tour the island. He returned with his family in 1976. That famous visit — which featured Trudeau shouting “Viva el primer ministro Fidel Castro!” on television — was a propaganda coup for the regime. Pierre Trudeau was the first leader of a NATO nation to visit the island since the communist takeover.

The Trudeau family has never shied away from showing their love for tyrants. Back in 2006, Alexandre Trudeau, the youngest son of Pierre Trudeau, penned a gushy tribute to Fidel Castro in the Toronto Star for his 80th birthday. The article featured praises to the revolutionary leader, praising him for being a “great adventurer…a wonderful scientific mind” and having “one of the most comprehensive and full intellects that can be found.”

All this clearly establishes that the Trudeau family held a soft spot for Fidel Castro, the tyrant. And the same love is being followed by his son, Justin Trudeau, who is reluctant to go against the dictatorial regime. This soft spot prompted multiple blind spots, which led to nothing but the Cubans’ suffering at the hands of the tyrant.