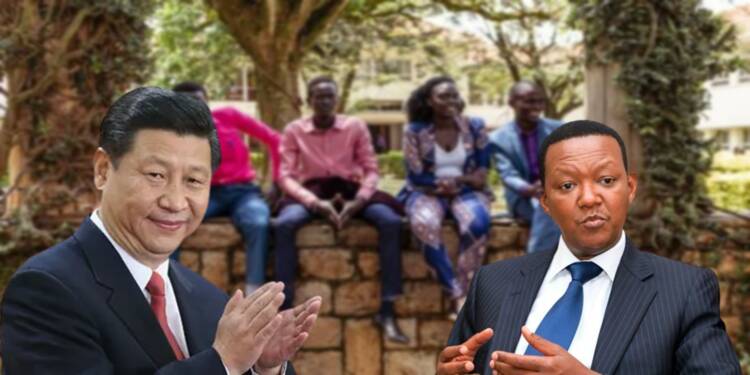 Racism incidents generally invoke public embarrassment, remorse and assurance of self-reflection — but not when the Chinese government is responsible.

There has been countless number of incidents involving racial prejudice against Africans by Chinese people in the past.

There were numerous instances of Africans living in China reporting hostility during the COVID-19 outbreak.

In the name of various virus containment procedures, many Africans were made to submit to arbitrary 14-day self-quarantines and forced coronavirus testing, regardless of their recent travel history, and hundreds were left homeless after being kicked out of their homes by landlords and hotels.

Images of Africans sleeping on the street while toting their possessions were widely shared on social media, infuriating African communities around the world and prompting some African governments to issue a public denunciation.

However, as was anticipated, the Chinese government denied claims that its actions were prejudiced and pointed its finger at “Western media” for “the tensions between China and African countries.”

Conflicts were recorded all throughout the Chinese territory as soon as considerable numbers of African students started to arrive in the late 1970s.

For playing music too loudly, Africans in Shanghai were attacked in 1979, which resulted in 19 foreigners being hospitalized. According to a New York Times account, 200 African students marched through the capital in 1986 following another altercation, this time in Beijing, yelling that Chinese professions of “friendliness were a front for bigotry.”

According to a 1994 article by Michael J. Sullivan in China Quarterly magazine, 1,500 of the 6,000 foreign students in China by 1988 were African and had been dispersed to colleges across the nation as a strategy to reduce racial tensions

The widespread prejudice against Black people on the Chinese internet is frequently too horrifying to repeat.

Don’t be fooled; the bigotry demonstrated by Chinese does not stop here. More heinous activities that can only be described as a neo-slavery project against the poor Africans are being engaged in by Beijing. Many Africans are being smuggled to Myanmar at the Chinese’s command under the pretence of employment placements.

There is a sophisticated scheme in place to deceive Africans. A Facebook page that frequently appears in the East African region invites “models,” “saleswomen,” and “English teachers” to apply for jobs in marketing, teaching languages, and translating.

Additionally, the promised salary is substantial by East African standards. One job description for a “sales professional” claims that the pay is 75,000 Thai Baht (TBH), or around KSh256,000 ($2,098), each month.

The advertisement demonstrates how easy it is to qualify. You should possess a university degree, strong communication abilities, and a “cheerful” disposition. Furthermore, by hiring more employees, a human resources manager earning Ksh150,000 ($1,229) per month can more than quadruple their income. According to one offer, they would receive $139 for every employee they oversaw.

Fast typing speed and the ability to move to Thailand, with the assurance that their visas would be arranged and that they will have an airline ticket assured, are other requirements for the positions.

It turns out that because of this recruitment, more East Africans are travelling in large numbers to Thailand but are ending up as slaves in Myanmar.

One recently rescued survivor from Myanmar said that they were tricked into taking the jobs but were immediately transferred to an unidentified location after they arrived in Thailand, first on a tourist visa. Then their passports are taken away citing verification. After that these people are smuggled into Myanmar, which has been in a state of emergency ever since the military regime overthrew Aung San Suu Kyi’s democratically elected government there last year.

You see, given how dangerous it is to travel between Nairobi and Myanmar, these Chinese gangs have a carefully thought-out plan. Travelers are deceived into believing they are headed to Bangkok, a well-known tourist destination known for its blind masseuses, despite the fact that there are no direct flights or diplomatic missions between any east African nation and Myanmar. Others are promoted as jobs in Mae Sot, a Thai town close to the Myanmar border.

They typically perform their jobs in a region that the insurgents in Myanmar who oppose the junta control. The Chinese criminal cartels, who occasionally pose a threat to Thai and Laos government officials organizing rescue efforts, are given protection by the insurgents.

Racism is fairly pervasive in the Chinese homeland. There haven’t been many cases of people being charged with crimes against Africans, and the constitution hasn’t done much to safeguard China’s own ethnic minorities either. Perhaps Beijing is institutionally supporting the enslavement of Africans. Chinese President Xi Jinping has long advocated for the establishment of a “community of shared future for mankind” on the international scene. One should consider whether these incidents are just a reflection of the type of society that Xi hopes to create.