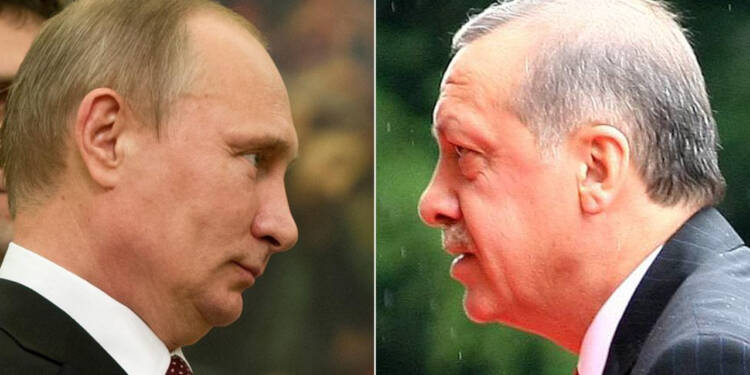 Turkey Northern Syria News: Erdogan assumed that Putin won’t pay heed to Syria as the Ukraine war rears its nasty head. Alas! Nothing is nasty for Putin. Erdogan tried to attack Putin’s influence in Syria and now, Putin has a warning for him.

More than a week ago, central Istanbul was rocked by a terrorist attack. Turkish officials reported that an explosion in a crowded location in Istanbul resulted in at least six fatalities and 81 injuries. A Syrian national arrested by the police blamed Kurdistan Workers’ Party (PKK) for the attack. However, PKK denied any role explaining that they would never target civilians.

Countries expressed solidarity with Turkey and the Turkish people on the attack. The US too expressed condolences. However, Turkey vehemently rejected US condolence statement and accused the US of being complicit in the attack. Turkish Interior Minister Süleyman Soylu said, “I emphasize once again that we do not accept, and reject the condolences of the U.S. Embassy.”

The U.S. Mission in Türkiye is deeply saddened by the explosion in Istanbul this afternoon. We extend our deepest condolences to the families of those who lost their lives and wish a speedy recovery for the injured.

Capitalizing on the situation, Turkish warplanes carried out operation ‘Claw-sword’ against the banned Kurdistan Workers Party (PKK) and the YPG, which Ankara claims is a branch of the PKK, and destroyed 89 targets in Syria and Iraq. According to the defence ministry, retaliation on Sunday and Monday resulted in the deaths of 184 terrorists.

Turkey also said that its weekend action was in response to a bombing last week in a major pedestrian street in Istanbul that killed six people and was attributed to Kurdish terrorists by the government. Although, PKK and SDF both denied being involved in the attack.

Analysts believe that Erdogan engineered the terrorist attack himself as his popularity is taking a plunge and as the elections in Turkey draw near. Erdogan’s shrewd intention was to finally attack Russia-backed Syria. It blamed the US for the attack as Washington had warned Ankara of expanding the buffer zone in northeast Syria.

Merva Syamend, the spokesperson of the mainly Kurdish YPG militia, said: “The Turks have bombed a lot of places in north-east Syria by drones and by aircraft. Their excuse is the bombing in Istanbul. They accused the YPG for that attack but that’s not how we conduct ourselves.”

Syamend continued, “We believe that the attack was staged by Turkish intelligence to kill two birds at once: one as a pretext to attack us and secondly to accelerate the process of sending back Syrian to the areas the Turks occupy in Syria.”

Also Read: Turkey wants to control Libya’s resources with UN’s blessings, but Russia is well ready to crush it

Moscow has urged Ankara to restrain from violence in Syria. In the midst of a fresh escalation in a prolonged conflict, a Kremlin representative expressed concern about the recent escalation of the war in the region. The warning is noteworthy for Turkey.

Clearly, Russia isn’t happy with the recent escalation in Syria by Turkey. Russia’s sway in the north is something Turkey wants to get control of. If Turkey crosses its line, it is possible that a military conflict breaks out between Moscow and Ankara.

Russia wouldn’t like to lose its feet in Syria which it had gained after years of infighting. Turkey is surrounded by enemies in the region, who tend to share good, if not amicable, ties with Russia. Greece and Cyprus are two major countries that might not shy away from jumping on the bandwagon. Greece has long accused Turkey of undermining its territorial and maritime sovereignty in the Aegean Sea region. Turkey also shares similar conflicts with Cyprus.

When it comes to geopolitics and foreign policy, Turkish president Erdogan is all of a doodah. It looks like he’s all over the place. Biting off more than he can chew is his favourite pastime. But his recent adventures in Syria have now put Turkey on a suicidal trail. And Turkey won’t be hounded by Russia only, Greece and Cyprus might also not like to squander this godsent opportunity.

Trudeau’s Haitian adventure is a lesson in incompetence