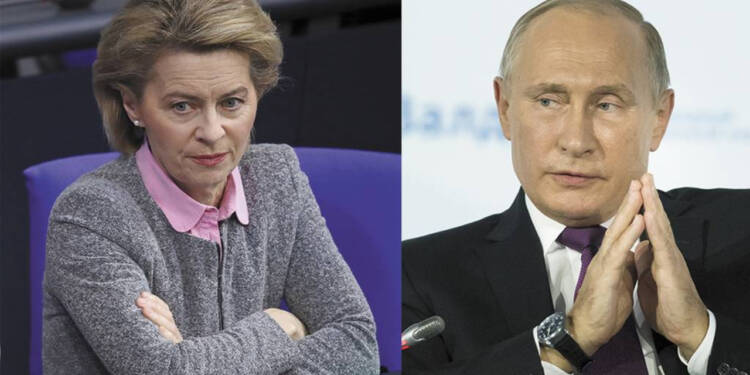 One way or another, the European Union has always looked for possibilities to confiscate Russian assets in European nations. If one remembers, in July, it was reported that Brussels is exploring legal ways to reuse frozen Russian assets for extending aid to Ukraine. However, the EU was forced to leave the situation in the middle due to Russia’s warning and international law.

However, old habits die hard. In reality, the EU never backed away from its plan to exploit these Russian assets. The EU is now preparing to challenge international law and attack Russia’s enormous gold mine, with full force.

According to a media report by Politico, The European Commission is exploring legal options to confiscate Russian state and private assets and pave the way for Ukraine’s reconstruction.

According to the document seen by POLITICO, the EU is looking for ways to strengthen the tracing, identification, freezing, and management of assets as preliminary steps for potential confiscation,”.There are almost $300 billion in frozen assets of the Russian central bank as well as the assets and earnings of people and organizations on the EU’s sanctions. Existing International law, however, mandates the member state to leave the assets completely as they are.

Chalk out a plan

This is one of the main reasons why the EU has always fallen short of snatching Russian assets. Currently, there is no legal mechanism to confiscate Russian assets, this was an issue that was pointed out by U.S. Treasury Secretary Janet Yellen back in May. Yellen had then called for the creation of a tribunal along with appropriate laws to start the confiscation and hence, a proposal was planned accordingly by Brussels.

The proposal, which has the support of Kyiv, Poland, and the Baltic States was first put up in May. EU leaders gave the Commission the duty of researching legal alternatives to take Russian assets that are now blocked as a result of sanctions in October. Hence now, Brussels is readying proposals to make sanctions evasion an EU crime, a step that could facilitate and hasten EU’s confiscation — but only in case of a criminal conviction.

But there are several loopholes that the EU would need to address before the formal implementation of new laws. First off, if the EU seizes properties on its territory, it would still need to contest each claim in court, which would probably require years of court proceedings.

The assets would be regarded as foreign investments, and as such would be protected against expropriation without compensation and entitled to fair and equal treatment under international agreements that Russia has with many EU nations. Furthermore, without Russia’s consent, the EU still can’t use the Russian central bank’s assets. The EU is considering charging those sanctioned individuals who want to transfer their property outside of the EU by pushing for an “exit tax” on their assets or the income from their assets.

This could bring about its own set of legal problems because it might invite anti-discrimination provisions of international law and that group’s potential defense of the human right to property.

All in all, seizing and confiscating Russian assets would still be a herculean task given the legal powers Russia has on its side. And hence, one could easily anticipate why the European Union is so eager to bypass every law possible. The details of the new draft are not entirely out in open, but, it indicates that the EU’s most ambitious project is still bound to fail.

That’s because a lot of these assets would be considered foreign investments, which enjoy protection against expropriation without compensation and a right to fair and equitable treatment under international treaties that Russia has with a lot of EU countries.

So, it looks like, the EU would need to argue each case in court, likely having to litigate for years, and at the end of maybe 20-30 years, gain a few bucks.