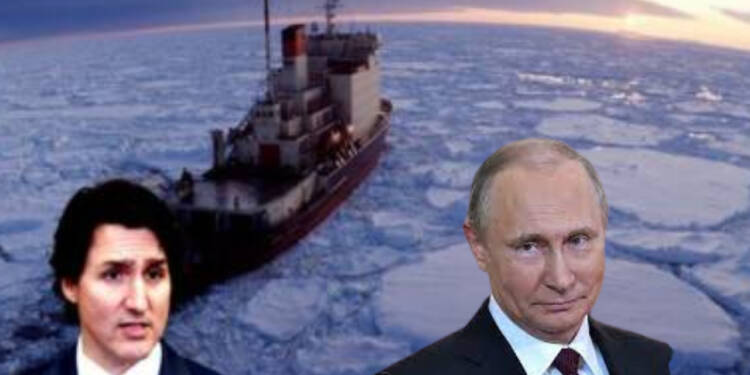 “I see no real threat today to our territorial sovereignty, nor do I see one in the near future.” Canada’s Chief of Defence Staff General Wayne Eyre said these words just last month in the context of a possible Russian offensive in the arctics. But this assessment has been proven wrong as tensions are mounting at the top of the world. Canadian officials and experts have been giving a wrong assessment that as the war in Ukraine has occupied Russia, it would no longer have any expansionist ambitions in the Arctic.  But Russia has not forgotten this emerging geopolitical theatre and has ramped up its operations. And as a result, Canada is now directly under the Russian line of fire.

According to new media reports, Russia has started sending long-range bombers back over the Arctic toward North American airspace following a short-lived pause during the early months of its war in Ukraine.

Reportedly, Russian submarines are also operating off both coasts as Moscow seeks to demonstrate its ability to strike Canada and the United States.

Lt.-Gen. Alain Pelletier, the deputy commander of the North American Aerospace Defence Command said, “The (Russian) activities are not only limited to long-range aviation. Russia uses its submarines now both on the Atlantic coast and the Pacific coast to actually demonstrate its strategic capabilities and to present a threat to North America.”

Not only this, but on Tuesday, Russia -President Vladimir Putin touted Russia’s Arctic power at a flag-raising ceremony and dock launch for two nuclear-powered icebreakers that will ensure year-round navigation in the Western Arctic. Putin said such icebreakers were of strategic importance for the country.

These nuclear-powered icebreakers will enable it to maintain a year-round presence in the Arctic, according to officials. With this, Russia has put itself in the position of becoming a rival to Canada by attempting to increase its territorial power in the Arctic.

Read more: Canada may lose the Arctics to its own allies in the coming 10 years

As of 2022, Russia is the only country in the world that does have nuclear-powered icebreakers in its fleet. Canada has the second-largest icebreaker fleet in the world after Russia.

But Russia has further plans to build in total seven vessels of this type with five either completed or under construction.

In addition, Putin emphasised the importance of expanding the Northern Sea Route, which enables ships to travel to Asian ports up to 15 days faster than by way of the Suez Canal.

Since the past decade, Russia has been steadily expanding its engagement in the Arctic, which is crucial to its interests. Russian activities will only increase as the Arctic ice melts, and it won’t be long before the region turns into a major geopolitical flashpoint. Already, Russia is modernizing its military to combat Western systems and missiles. Arctic experts estimate that, if the West decided to intervene, it would take at least ten years for its military to catch up to that of Russia in the region.

Surely, its the time for Canada to understand the threat and not run away from it. Canada, however, is distancing itself away from this big fight. Under Prime Minister Justin Trudeau, Canada has chosen to be domestic. With an array of issues such as LGBTQ, human rights, freedom protests, and immigration, Trudeau is left with no time to put his head into matters about the Arctic.

In fact, Canada is choosing another failed misadventure rather than repairing the state of its military, which is in disarray. Canada might lead an unnecessary, causeless intervention in the small nation of Haiti on orders from Washington. However, the same Wahington might not come to Canada’s rescue if things worsen.

In the event of an attack on sovereignty, Trudeau might be relying on NORAD, the North American Aerospace Defense Command, which is a combined organization of the United States and Canada.  However, Trudeau must be living in a utopian heartland to consider this. According to some reports, Canada has made very small investments to offset Russian influence in the Arctic, and the bigger picture shows that the US can easily ditch Canada.

Thus Canada must take this challenge seriously and come up with a strong Arctic strategy. Since it might be left all alone with a weak policy and military when it enters the deep water.