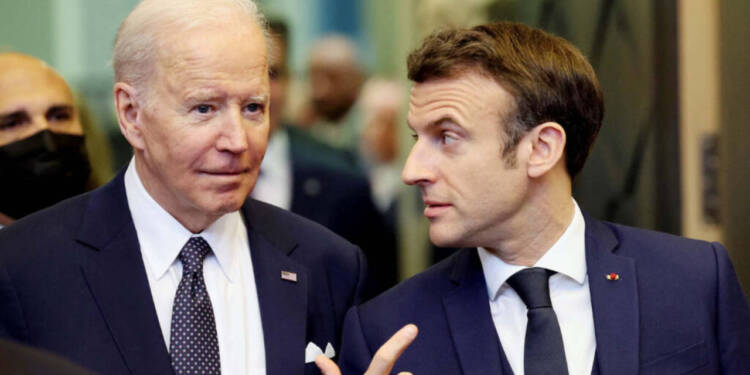 This is an open and obvious fact; French President Emmanuel Macron and US President Joe Biden don’t share a merry relationship. This is something that even the White House is aware of, which is why Biden has repeatedly tried to destroy or contest Macron’s geopolitical goals. From the AUKUS deal to the Ukrainian war, Biden and Macron have always found themselves on different sides of stories.

However, Europe is what unites them both. That is, the goal of both leaders, to keep control of Europe.

France has never been able to show its valor to the United States. But Macron might change the dynamics with his upcoming trip to the USA. French President Emmanuel Macron is all set to arrive in Washington D.C. to attend a state visit at President Joe Biden’s invitation. However, the president of the Fifth Republic is not arriving in a merry mood in the USA. Obviously, Macron is not having dinner with a bosom buddy. Instead, he is having dinner with a man who has constantly shattered his dreams.

France suffered understandable anger over its loss of a major submarine export deal to Australia and the ensuing AUKUS agreement with the U.S. and Britain to develop an Australian nuclear submarine force. Moreover, as France was not informed before the US deal, Macron was caught off guard.

Additionally, Macron is annoyed by the strategies Biden is using to gradually and methodically move Europe into US clinical support. If one remembers, just a few days ago, Macron had thrashed United States’ Inflation Reduction Act which was a direct attack on European automakers. Macron had also indirectly asserted that it was actually the United States which blew the Nord Stream Pipelines. Criticizing the sabotage as a gruesome attack, Macron had called for a common European strategy to protect vital projects.

The confidence between France and the US was eroded as a result of these disputes between them. Macron being in charge of the EU’s only nuclear power state and the most credible military has also raised eyebrows by declining to take the lead on military support to Ukraine.

The French president made harsh remarks at the outset of the conflict in Ukraine denouncing the Russian invasion. However, as the tides began to shift in favour of Moscow, France turned against the United States and refused to provide Kyiv with weapons on an unconditional basis.

In addition, Macron has also become a major hurdle in Ukraine’s pathway to obtaining EU membership.

Biden’s call for settlement may fail

The White House is aware of this unexpected change of heart. Understanding all of this, Macron was subsequently invited to Washington, D.C. by Joe Biden. The United States is perfectly aware that if Europe abandons the conflict in Ukraine, Ukraine would collapse and the purported conflict with Russia would end immediately.

Hence, Grandpa Joe was furious and started putting pressure on nations like France with FATF. However, these methods of pressure won’t have any impact on Macron. When it comes to defending Europe, Macron still continues to be in a strong position. Macron could play the energy crisis card by blaming the US for the European energy crisis and leave Biden in a huff.

European leaders might be lovesick for the United States, but, Macron for sure is definitely not among the fans of Biden. It looks like, French President Emmanuel Macron hates US President Joe Biden and his administration. And he is traveling to the USA in a furious frame of mind. The worst possible outcome of this summit could be that both leaders depart on the same footing but with rumors of a verbal conflict.