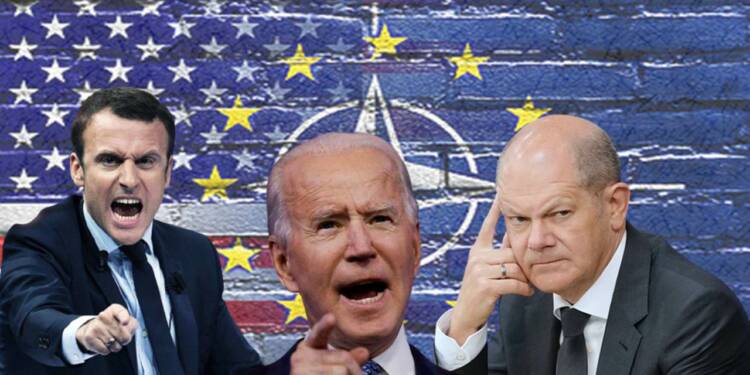 The Ukraine war has definitely not been kind on both Europe and NATO. By cutting off its supplies to Europe, Russia has strategically weaponized natural gas, leaving the European continent gasping for survival.

Despite the extensive financial and military assistance provided to Ukraine by Washington and its allies, Russia controls a big chunk of Ukrainian territory, whereas, the whole Eurozone is in deep recession. Furthermore, due to USA, Europe’s ambition of being self-sufficient has been dealt with a serious blow.

Now, the leaders of the NATO states have locked themselves in a nasty war of words, in which they are making a huge hue and cry as to how they have been on the receiving end of the war in Ukraine. Yes, divided they stand, united they fall; this is the real face of NATO.

What was the real purpose of the Ukraine war? The answer is but obvious, that is to defeat Russia in Ukraine and disintegrate it into smaller regions. However, it now appears that NATO itself is breaking apart. The cracks are widely visible.

According to a media report by POLITICO, European Union has ‘officially’ criticized the US for profiting from the Ukraine war.

Top European officials are reportedly outraged with Joe Biden’s administration and have started to accuse Americans of profiting cunningly from the war while EU nations suffer.

One senior official source told POLITICO, “The fact is, if you look at it soberly, the country that is most profiting from this war is the U.S. because they are selling more gas and at higher prices, as well as more weaponry,” Citing the rising tensions with the US, the senior stated that, “we are at a historical juncture”.

In addition, EU’s chief diplomat Josep Borrell called on Washington to respond to European concerns. He said “Americans are friends. But, the white house takes decisions which have an economic impact on us,” At the G20 summit in Bali earlier this month, the European leaders made an effort to confront Biden about the high cost of gas, but in vain as the White House refused to entertain any such requests.

It would be wrong to think that this again is a continuation of the same old US versus EU episode, where small altercations over issues happen. It is entirely different this time because the issue at hand is that of a war rather than the old EU versus US phenomenon. Additionally, in a new turn of events, European politicians are also fighting among themselves.

One needs to see the video footage of former UK PM Boris Johnson blaming Germany, stating that Berlin wanted Ukraine to be defeated. Germany angrily dismissed claims by Boris Johnson citing them as unfounded claims. Not only this, even Germany and France are embroiled in cold war style diplomacy. Just a few days ago, French president Emmanuel Macron invited German ministers to prepare a roadmap to fight the USA. But, Scholz was not invited to the party. Macron has occasionally criticized Olaf Scholz for economic mismanagement within the European Union.

Read More: In 10 years, there won’t be a NATO or a Ukraine, But NATO has a 10-year-plan for Ukraine

In addition, Turkey and Greece are looking to fight, Hungary is stoking anti-EU sentiments in the Balkans and Italy is also escalating its rivalry with France. This increasingly toxic atmosphere will have a negative impact on the Western alliance. This bickering is exactly what Putin would wish for, with the EU and U.S. fulfilling his wishes.

However, one must note, that having the mindset of a victim dilutes the human potential. By not accepting their responsibility for their own mishap, NATO allies are greatly reducing their own potential to end the crisis once and for all. NATO has made these mistakes; therefore it should clean it up without waiting for anyone else to do it.