In 10 years, there won’t be a NATO or a Ukraine, But NATO has a 10-year-plan for Ukraine 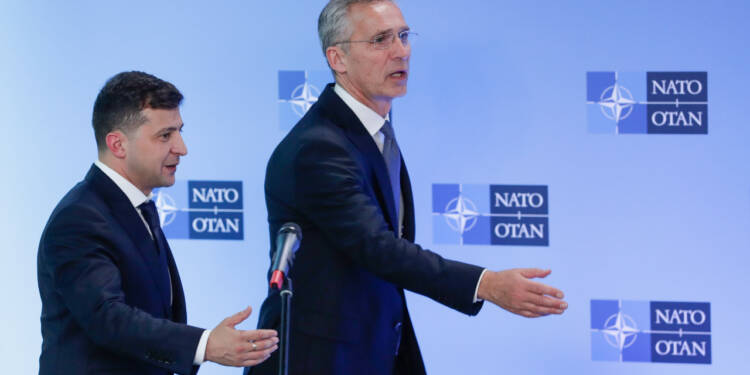 The Russian-Ukraine war has not been well for Europe. Russia’s strategic weaponization of natural gas by halting its supplies to Europe has left the continent on life support. Moscow’s actions were not unjustified, they were in retaliation to severe sanctions placed by the west to quash the Russian economy. Well, despite the very generous weaponry and financial aid offered by Washington and its allies to Ukraine, Russia has ended up annexing large swathes of Ukrainian territory in its southern region and would not be content on declaring a ceasefire as long as Ukraine affirms that it would not become a part of NATO.

NATO is developing a 10-year plan to rebuild the Ukrainian defense industry, with the first meeting between the alliance and Kyiv confirmed for the next week. “We will be looking at defense planning requirements to get Ukraine fully interoperable with NATO,” a senior NATO official said.

Read More: To avert a civil war, France may quit NATO yet again

You see, the NATO alliance knows that it has lost the war. It would indeed be a humiliation for the Biden administration to have lost a war against the Russians so they are now trying to play in a bluff to irk the Russians. Biden knows that Russia would always be on the offensive until Ukraine reaffirms that it would never become a part of the NATO alliance. As a result, it is rallying its allies to orchestrate circumstances that would irk Russia.

Russia cannot prolong the conflict for all eternity. It would have to declare a ceasefire sometime to get things back to normal once it has secured its borders. Well, but have you ever wondered if the alliance could even spend enough to support Ukraine. NATO’s de facto leader the US has provided in excess of $50 Billion to Ukraine ever since the war started.

Although the US taxpayer does have a breaking point, Washington is probably going through the worst financial phase in its history since the great depression. And Biden siphoning off the taxpayer money has made things worse. No President in the upcoming ten years would not be mad enough to give up their resources to fund a country in the east. And well, if we talk about Europe. The continent has probably not seen such worse days since the second world war.

Financial giants like Germany, France and the UK are struggling owing to quashed gas supplies from Russia. These nations are having to subsidize energy for their citizens which has resulted in hundreds of billions of dollars in debt which would take years to pay.

And if you think that the remaining dozens or so allies in NATO would be able to make a difference, you’re mistaken. These countries hardly have the resources to keep their state of affairs in order, they surely cannot go around assisting Ukraine to stand up on its feet.

In conclusion, NATO is in no condition to offer any help to a struggling Ukraine and is only exerting whatever little soft power it is left with. Russia would probably leave the remaining Ukraine in peace if the next leadership is loyal to Kremlin and does not entertain any ideas from the west.

‘Our problems are our problems,’ South Africa, Botswana and Mozambique have sent a strong message to the West