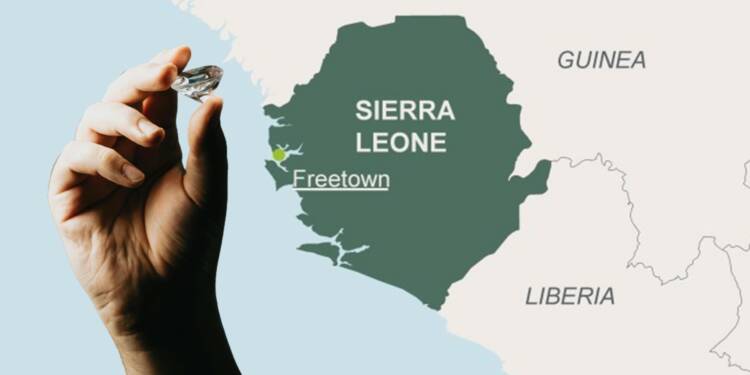 Sierra Leone is a nation in West Africa, its name originates from the 15th-century given by Portuguese explorer Pedro de Sintra. The original name, Serra Lyoa (“Lion Mountains”), referred to the range of hills that surrounds the harbour.

In the 19th century, the surrounding coastal settlements were brought into the British domain. The colonial government signed agreements with neighbouring rulers and gained control over the coastline. During the European partition of Africa, the borders were demarcated with the neighbouring Liberian and French regimes. A British colony came into existence in 1896. A hut tax was levied without the consent of ruling chiefs due to which a rebellion took place in 1898 which was crushed brutally by the British.

The chiefs in the colony ruled under the supervision of the British. Following the end of World War 2, the British accepted the demands of the nationalist leaders in Sierra Leone. The constitution came into force in 1951, under which a party named Sierra Leone People’s Party was formed with Milton Margai as its leader.

The first years of independence witnessed prosperity; mineral wealth was used to earn revenue and the revenue was majorly invested in the development of the country.

In 1964, Milton Margai died, he was succeeded by his brother Albert Margai. But soon after that, the opposition party called All-Peoples’ Congress (APC), under Siaka Stevens, came to power in 1967. Under Steven Sierra Leone witnessed killings of political rivals and deterioration of the economy. Diamonds were smuggled, which led to huge losses in revenue.

Sierra Leone’s problems escalated in March 1991 as the uprising in neighbouring Liberia found its way in Sierra Leone. The rebels were known as the National Patriotic Front of Liberia (NPFL), it was led by Charles Taylor. Sierra Leone was also attacked by the Revolutionary United Front (RUF), which was led by an army officer of Sierra Leone named Foday Sankoh. RUF and NPFL joined hands and unleashed a brutal civil war.

In 1992, a coup emerged which intensified the crisis as the RUF’s dominance increased. It brought more diamond mines under its control and RUF misused the resources to finance its atrocities.

Children were also abducted and recruited by the RUF as they are easy to brainwash and mould according to the needs of RUF.

In 2000, there was a battle between government troops and RUF which culminated in the capture of Sankoh and the expulsion of the insurgent groups from Sierra Leone by the army. Finally there was success as many RUF rebels surrendered and released territory under its control.

The civil war ended in January 2002. But by that period, it has been estimated that 50, 000 people lost their lives and 2 million were displaced.

Sierra Leone’s economic development has always been hampered by an overdependence on mining. Successive governments and the population as a whole have always believed that “diamonds and gold” are sufficient generators of foreign currency earnings. Majority of the people in the country are involved in agriculture which accounted for 58% of the GDP in 2007. Rice is a staple crop with most farmers growing it during the rainy season.

Sierra Leone was overly dependent on its mineral resources, particularly diamonds. During the 1970s and early 1980s, the nation’s economy suffered losses due to low production in the mining sector. Poor exchange rates and budget deficits resulted in inflation. Sierra Leone relies on the IMF and other external institutions for financial assistance.

Export of mineral resources is the main source of foreign exchange reserves. But unfortunately, the nation has not been able to properly utilize its diamond reserves. Production annually is estimated between $70-$250 million but only a small part of it is exported.

Sierra Leone is a country which has been through a severe political, social and economic turmoil. But it has one thing in its possession which can change everything and that is diamond. The African nation can use it to improve its condition and come out of the mess that civil war and corruption has created since its independence. It has a bright future ahead, it needs an honest leader and people who desire unity, peace and prosperity.

Currently, the nation can benefit from the hiked prices of diamond, in the international market, which the Western nations desperately need. In fact, the European Union has excluded diamond from its sanctions on Russia. Sierra Leone can use this golden opportunity and earn huge revenue which it can invest in infrastructure, industrial, agricultural, education and other crucial sectors.

It is important to acknowledge that the money earned from the mining sector must be reinvested in many other sectors in order to diversify the country’s revenue streams. It is only prosperity which can change the scenario of the country’s instability problem. Economic prosperity will divert the youth’s attention towards business and other developmental streams from other non-productive work.

Similarly, the fight against “Blood Diamonds” must also be strengthened. The Kimberley Process (KP), which is a plan formulated by several countries, NGOs and businesses to eradicate conflict diamonds, should not just be on paper but rather lead a movement to make sure that what happened in Sierra Leone is not repeated in other mineral-rich nations in Africa. Considering Sierra Leone’s experience, it would be much better, if it leads the Kimberley Process, which it is currently doing.

The nation has the potential, all it needs is a direction.