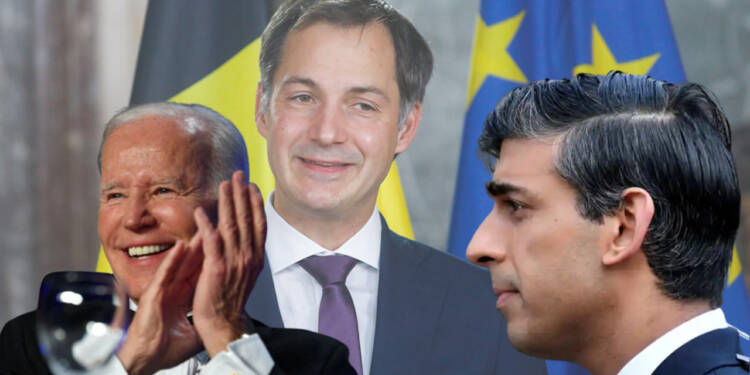 A deal that could have benefited the defence production of UK is now in tatters. Belgium, a NATO member and a European ally, has blocked the UK’s AUKUS pact. Despite the fact that both Belgium and the UK are NATO members, a dispute has developed between the two nations over the transfer of crucial technology that is essential for sustaining the British nuclear deterrent. The argument has intensified in response to concerns from inside the Belgian government that Britain has threatened to cancel the arms deal for machineguns built in Belgium by FN Herstal worth up to £514.90 million (€600 million) unless the export is approved.

In a time of war in Europe, senior Belgian government sources fear that the dispute threatens NATO and Western unity.

Two weeks ago, the weak ruling coalition of Belgium made up of the greens blocked the shipment of a specialised isostatic press that was required to sustain Britain’s nuclear weapons. The American-Belgian company EPSI in Antwerp manufactures the technology, a specialised high-pressure isostatic press used in the nuclear sector to handle radioactive waste. What’s the catch here? It’s an American-Belgian company.

Further, according to the Flemish BusinessAM website, a senior source in the Belgian government described the presses as “unique in the world.” The British Atomic Weapons Establishment at Aldermaston, which is in charge of the design, production, and maintenance of British nuclear weapons, uses the press as a component of the manufacturing process.

The absence of this nuclear technology can make the UK paralysed in the AUKUS deal. Australia is yet to choose between UK and US as to whose nuclear submarines it’d opt for. If the UK would be facing problems sourcing important nuclear technology, Australia would wisely prefer the US on that matter.

Last year, the AUKUS deal was announced under Australian Prime Minister Scott Morrison in a secret agreement with Washington and London to encounter the growing presence of China in the Indian Ocean Region (IOR) and the East and South China Seas. Under this deal, Australia was supposed to acquire at least eight nuclear submarines.

Canberra is anticipated to decide between British Astute-class submarines and US Virginia-class submarines. Defence researchers estimate that the projected cost of Australia’s eight planned nuclear submarines will be at least $70 billion and “highly likely” to be higher.

According to a recent analysis from the Australian Strategic Policy Institute, the price might reach $171 billion with inflation.

Yes, $171 billion. The kind of money neither UK nor the US would want to lose.

Clearly, the US doesn’t want to lose Australia to choose the UK. It’s also coercing Canberra since June when US lawmakers introduced a bill to train Royal Australian Navy officers to operate nuclear submarines. The bill was named as “Australia-US Submarine Officer Pipeline Act.”

Despite Australia having yet to choose which submarines it wanted, the bill was introduced. And, now Belgium not supplying crucial nuclear technology is another straw in the UK’s wind.

Further, Belgium has also recently signed a deal with the US to acquire up to 120 AIM-120C-8 advanced medium-range air-to-air missiles (AMRAAM) and AIM-120C captive air training missiles (CATM).

It can’t be ruled out that if the US is affecting the decision of Belgium not to transfer nuclear technology to the United Kingdom.

Georges Gilkinet, Belgian Deputy Prime Minister and a member of the green Ecolo party said, “The British are our neighbors, our partners in many areas, including in NATO. At times like these, it is important to appreciate it, but it is also necessary that the law is respected,” he said, referring to the upcoming ruling of a committee on nuclear non-proliferation.

So, as of now, UK’s AUKUS plans have hit the unbreakable Belgium wall. And the UK doesn’t even have any alternatives for the technology. Hence, the only country which benefits from the breakout of Belgium and the UK is the United States.