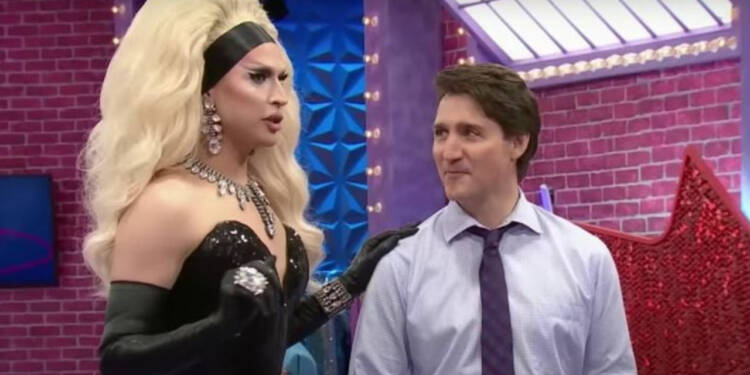 The Canadian Prime Minister has his priorities set. As his ‘Champion of LGBTQ rights’ persona clearly explains he gives more importance to a drag race rather than a remembrance day. We know how he fled to Cambodia just to escape the National Remembrance Day ceremony held recently in Ottawa. But, he has all the time to serve his gracious presence in a Drag Race show.

The people on the internet as well as the political spectrum in Canada are cringing over Justin Trudeau making a guest appearance on an episode of “Canada’s Drag Race: Canada vs. the World,”

His brazen reality TV publicity stunt perfectly captures Trudeau’s tokenism regarding LGBTQ issues. For those who don’t know, the programme is a part of the massive “Drag Race” franchise, which peaked in popularity in the middle of the 2010s. American drag queens competed in the initial series of the franchise, “RuPaul’s Drag Race,” for the opportunity to be named a “drag superstar” by drag king RuPaul.

The prime minister appeared in a unique spin-off that pits former “Canada’s Drag Race” competitors against their international counterparts.

But, what is irking the nerves of the Canadians is Trudeau’s showy presence. As can be seen in the show’s trailer, which prominently promotes the prime minister’s participation, Trudeau’s guest appearance is ostentatious, attention-seeking, and ultimately self-promotional.

Mel Woods, a senior editor at Xtra Magazine (Canada’s largest LGBTQ publication), wrote an article arguing that Trudeau’s upcoming appearance on “Canada’s Drag Race” has “incredible potential to be cringe,” and is “one of the lowest effort ways possible” to engage the LGBTQ community. “We know that the PM and his government can do more to help our communities,” Woods wrote.

Despite its enormous budget and cultural cachet, Woods noted that the “Drag Race” franchise is notorious for doing little to specifically help the LGBTQ community. In this manner, the program is ideal for Trudeau since it is all spectacle and has no accountability. The underlying politics is what irritates the public more about it.

Through his presence, Trudeau wanted to send the world a message: “Look at me! Look at how open-minded I am! “Look at how much of an ally I am to the LGBTQ community!”

Read More: Trudeau flees to Cambodia to escape the wrath of angry Veterans

Clearly, the guy who is the champion of LGBTQ rights never misses an opportunity to further his woke agenda. But, where was Mr. Trudeau when the Canadian war veterans were expecting his presence on the recently held National remembrance Day? It seems that fraternizing with drag queens is more important to Justin Trudeau.

The struggling Canadian war veterans are down with military trauma. They have been banking on the liberal government for some help. However, the government’s Veteran Affairs department has struggled to provide benefits to disabled veterans. The ruthless Trudeau regime offers no assistance to those who have given their lives in battle but has plenty of money to throw at LGBTQ initiatives.

Men who serve the nation are forced to suffer at the hands of the government in Canada because the prime minister is too busy to address the issue. He is busy attending Drag Queen shows and spreading the message of wokeism.