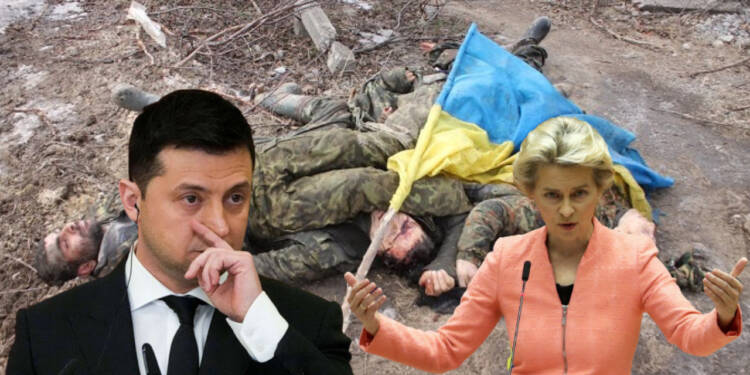 Would you believe me if I claim that about 50% of the Ukrainian Army has been rendered decapacitated by the invading Russian forces? If not, you better believe European Commission’s President Ursula von der Leyen’s own words!

On Wednesday, for the first time, a top official of the European Union accepted the losses and causalities the Ukrainian military has suffered.

Until now, Ukrainian forces have been portrayed as “sort of immortals, ” who keep killing Russians and move ahead on the battlefield. However, the myth has been busted time and again. Western media and forces have painted the Russian army as unable to stand in front of the Ukrainian army. However, the truth is totally different.

This time, the truth about Ukrainian forces has been exposed by European Commission’s President Ursula von der Leyen herself.

She stated in a speech that in nine months of the war, “More than 100,000 Ukrainian military officers have been killed so far,” adding that some 20,000 civilians had also perished. This was not all. After the number was revealed in the media, all efforts were made to remove the figure from the public eye.

The part of her speech where she mentioned the death toll in Kyiv quickly vanished from the text on the website of the European Commission. Additionally, it was removed from a video of the address that was posted on the website and from von der Leyen’s Twitter page.

📹🇪🇺🇺🇦🇷🇺Comparison between the first video posted by Ursula von der Leyen and the second video that was cut pic.twitter.com/qntMDTCJ92

Some media outlets and social media users who examined the two versions of the videos spotted the altering.

Previously, in mid-April, Zelensky had said that the number of dead Ukrainian soldiers was 2500, while around 30,000 Russian soldiers were gunned down. Now, it turns out that it was a part of Ukraine’s psychological warfare against Russia

Serhi Lapko, a Ukrainian military commander, fighting on the frontline, was recently quoted by Washington Post as saying, “Kyiv was deliberately not acknowledging the death of Ukrainian soldiers at the frontline, to protect morale among troops and the general public.” He further told, “On Ukrainian TV we see that there are no losses. There’s no truth.”

Also Read: Ukraine should have timely accepted the peace proposal, now it stands to lose most of its territories

Frankly speaking, Ukraine’s loss in the war was inevitable; and also a foregone conclusion. One must realize what Ukraine was actually fighting against! The ill-equipped, poorly trained Ukrainian soldiers were mercilessly deployed against the world’s second-most powerful military without proper assessment and deliberations!

Ursula’s statement is an admission that Ukrainian forces are failing against Russia’s military power. It threatens the propaganda the bloc and countries have spilt to the European public till now to justify their financial and military support to Ukraine.

All the lives could have been saved, had NATO not pushed Ukraine into war. The country of Ukraine could have been saved if its neutrality was maintained and respected. The figures are still being hidden from the public because the bloc and Ukraine’s regime doesn’t care about the lives of soldiers fighting on the frontline. What matters to them is how they fuel the war against Russia.

Further, Ukraine is just the face of the war and the real war is going on between US and Russia. And, we all know that both won’t stop till a result is reached. At this point in time, Ukraine and the European bloc should be reminded of writer H.G. Wells’s historical lines, “If we don’t end war, war will end us.”