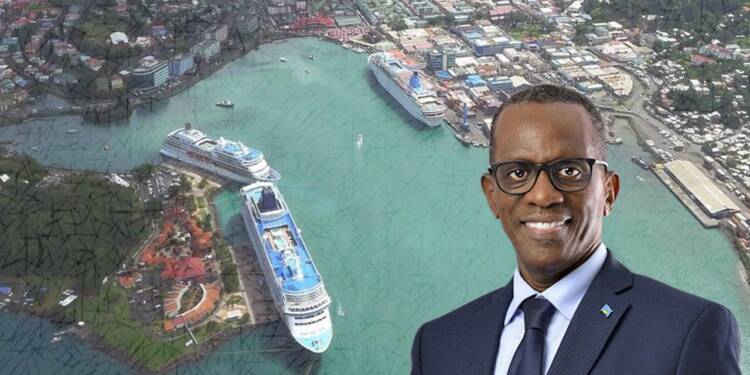 Saint Lucia MoU: Saint Lucia PM Philip J. Pierre is under fire. After having failed to deliver on curbing surging crime rate in the country it is courting another controversy over its two ports of Castries and Soufriere ports. The opposition United Workers Party is furious and has held a protest march in the country. So, what is exactly happening in the Caribbean nation of Saint Lucia? Let’s discuss.

Saint Lucia has signed a MoU for ports development.

Through this agreement, the Saint Lucia Air and Sea Ports Authority, SLASPA anticipates a transformation of the island’s cruise product, from the standpoint of the development of port infrastructure. This proposed investment supported by the government and SLASPA, is expected to enable Saint Lucia to modernize its cruise tourism product. However, this is not the whole story.

With the MoU signed between government of Saint Lucia and a British company called Global Ports Holding (GPH) ltd. the Pierre government has entered into an agreement with a foreign entity for the operation of the Castries and Soufriere ports. The biggest surprise here is that the SLASPA or the Government of Saint Lucia has publicized no details of the agreement. There are reports of $47 million deal between the government and the British Company and that the two ports will be sold / leased to this entity for 30 years with the option of an extension for another 10 years.

With this the SLP has not just “sold” the ports but also changed its stand on foreign investment when it was in opposition. Thereby it has virtually deceived the people of Saint Lucia and undermined its own sovereignty. When in opposition SLP had been highly critical of foreign investments and had taken strong stand against it.

Read More: St. Lucia is under the leadership of ‘epitome’ of incompetence

The Opposition leader Allen Chastanet has claimed that the SLP administration’s policies were not in keeping with its mandate of governing with a “people-centric” approach. He recalled how the SLP took the past administration to task for its foreign investment undertakings and “foreigners coming into this country and taking over critical assets in this country”.

It has to be noted here that even if the government of Saint Lucia was serious about boosting tourism in the country, it should have first tackled the issue of surging crime in the country. On the contrary, it seems to have no concrete plan to deal with violence and increasing homicide rates in the country which have made the people live in a sense of fear and insecurity. In such a situation, how does the government plan to boost tourism in the country if it can’t provide safer streets and public places? The opposition leader, Chastanet has also questioned the impact this latest development will have on the fishing community and the sustainability of their habitat.

The UWP’s political leader said that the objective of the protest march was to send out a statement that “our country is not for sale”. Saint Lucia is facing multiple crises today. The government should come clean on the projects to redevelop ports and its terms and conditions. The government must commit itself to accountability in the country, tackle corruption and affirm a grip on the national security. At such a time leaving the country at the mercy of foreign conglomerates may not be the best idea.

Saint Lucia’s PM should explain his economic policy and his vision for the country without undermining its security and sovereignty.