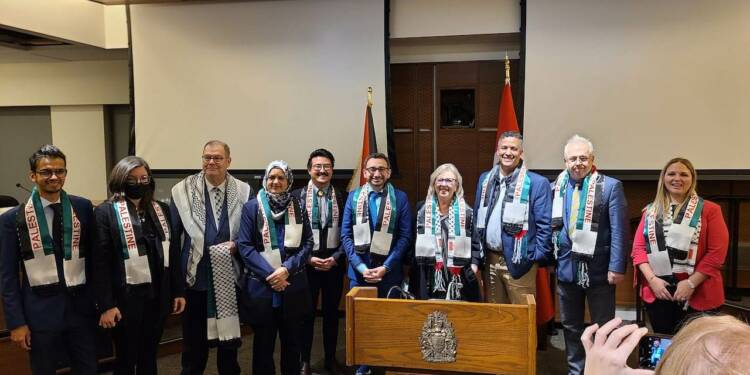 Liberal Party of Canada is taking a gigantic step in geopolitics. It’s going to infuriate its long-standing partner Israel and is aiming to shake hands with Palestinians. This monumental change by Justin Trudeau administration will be disastrous for Canada. Continue reading to know why. Strong, multidimensional relationships in the areas of politics, economy, social issues, and culture bind Canada and Israel together. Since 1948, Canada’s Middle East policy has been centred on defending Israel, particularly its right to coexist in security and peace with its neighbours.

However, it seems a monumental change is taking place behind the curtains. An antisemitism watchdog claims that on Tuesday, Canadian Transport Minister Omar Alghabra and Green Party Leader Elizabeth May met Nazih Khatatba, a well-known antisemite, Holocaust denier, and editor of Meshwar Media.

A Canadian politician while standing in front of the Canadian and Palestinian flags, wearing a kfiyah and a Palestine scarf declared, “I take marching orders from the official representative of Palestine to Canada.” The Centre for Israel and Jewish Affairs (CIJA) took a jibe on the statement saying that Canadians shouldn’t take orders from foreign governments when foreign interference is largely growing.

The federal government has been sponsoring anti-Israel publications, including the Arabic-language journal Meshwar Media, according to HonestReporting Canada (HRC). Between 2020 and 2021, they got $2,000 in COVID-19-related relief payments. Due to Meshwar’s recurrent posting of antisemitic material, several complaints have been made to police hate crime authorities. Nazih Khataba’s recent articles will make you clear how she thinks. In an article for Meshwar in August 2022, Khatatba said that the Israeli intelligence Mossad was responsible for the assassination of 11 Israeli sportsmen during the 1972 Olympic Games in Munich, Germany.

Meshwar published an article in December 2021 that called for the annhilation of Israel. The author Kamal Khalaf remarked, “We must actually start working to end the project of the State of Israel on Palestinian land and build our historic national home one every inch of it.” Yes, this is the kind of antisemitic people, Canadian cabinet is meeting with. These actions have increased in the last few days. It’s because the UN will vote on a crucial resolution to submit Israel to the International Court of Justice in the coming days (ICJ). An advisory opinion on Israel’s occupation of the West Bank would then be given by the International Court of Justice.

Although Canada had previously rejected this resolution, it may reconsider and vote in favour of it during the UN General Assembly plenary session. Further, an Op-ed in Hill Times, a media outlet that is indirectly controlled by the Canadian government titled, “Israel’s new government will test Canada’s shared values.” The intention is to create a perception that new Israeli government is an extremist one.

Former Canadian Prime Minister Stephen Harper and current Prime Minister Justin Trudeau have openly expressed their support for Israel during the last decade, and trade between the two nations has increased, having tripled in the previous 25 years. Trudeau’s controlled media would try to portray and create a perception that Israel is changing by cherry-picking context free statements. But doesn’t every democracy have elected politicians, whose opinions may be outstream.

Most Reliable Internet Service Providers for Your Home Office