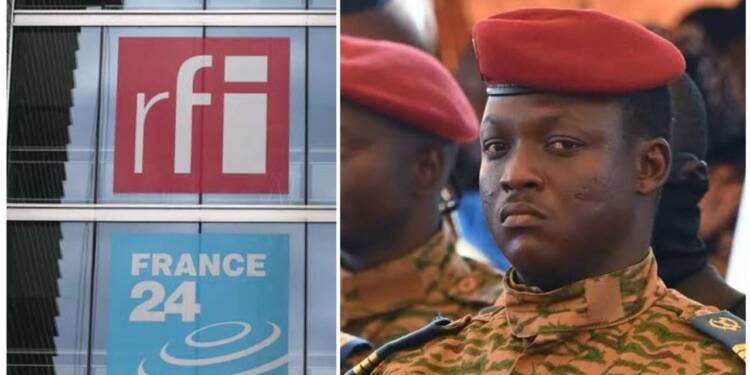 RFI Radio Broadcasts: France’s interference in the Sahel region of Africa has proven to be a blunder. Firstly, after its Mali debacle where the French government had to withdraw its troops, it was virtually driven out of the region as well; its image is deteriorating in West Africa and anti-France sentiments have been growing. Now, Burkina Faso has delivered another jolt to France’s influence in Sahel which will further loosen its grip in the region.

France’s RFI Radio Broadcast has been suspended by Burkina Faso government over alleged reporting of false reports and giving voice to Islamist militants.  The statement from the government of Burkina Faso said that RFI Radio had broadcast a message from a leader of a militant group in which he threatened the population. Burkina Faso also took this step because RFI had repeated a press report (which it later denied) that Burkina Faso’s President Captain Ibrahim Traore, who seized power in a coup in September, had said there had been an attempted coup to unseat him. RFI Radio Broadcast has strongly protested against the “unfounded accusations” and added that it will explore ways to restore its broadcasting.

Burkina Faso is the second West African nation to suspend RFI’s broadcast. Neighbouring Mali being the first one. This step by Burkina Faso will significantly curtail France’s influence and put a stop to its propaganda in the region, as RFI Afrique radio, has one of the largest footprints across French-speaking Africa.

The government of Burkina Faso has also noted that RFI Radio was spreading misleading information in the region and also helped “a desperate maneuver of terrorist groups” against Burkinabe citizens that are stationed to defend the country, adding that the authorities already protested the broadcaster’s publication earlier. The West African country which has been facing militant offensives since years therefore had to cut off RFI’s broadcast so that it is not used as a propaganda tool to further destabilize the country.

Relations between Burkina Faso and France have been worsening in light of its failure to contain terrorist groups and activities across the country and anti-France sentiments have been growing. This step will only further accelerate the process of overcoming colonial hangover of Africa and deter France from intervening in its internal affairs.

After driving out French troops and cutting off its military influence in the region, suspending France’s RFI Radio will lead to curbing its influence in another sphere in the region. West Africans have realised that the presence of an outsider in their lands serves absolutely no purpose and thus have taken a bold step in their interest by kicking out their former colonial power.

It can follow the examples of Ethiopia-Eritrea and Kenya-DRC-Uganda like military alliances which have more or less seen success in eliminating the menace of terrorism in their regions.

Further, Africa can take major steps to do away with those economic policies that bind these countries with their colonial powers. For example, it can print its own currency as even now 14 African countries use the common currency CFA Franc. Africa is dependent on Europe for manufacturing its cash but it doesn’t always have to. It can take help from countries like India or Japan in this regard to explore possibilities which will enable it to reduce its dependence on Europe for printing money in future.

Burkina Faso has showed the way. It’s only matter of time that the rest of Africa will also follow its footsteps.