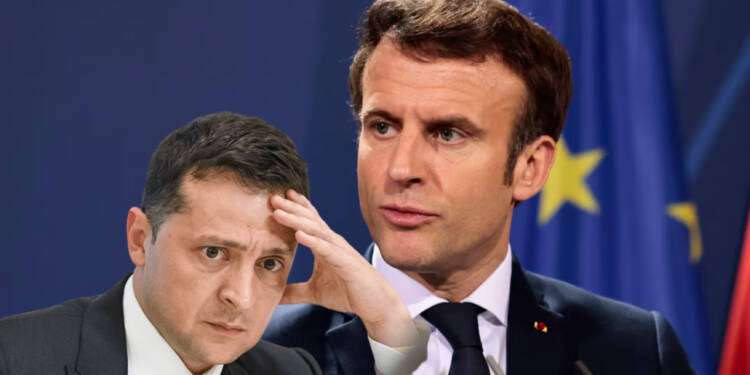 Though only Ukraine is at war with Russia at this point in time, the repercussions of the war are being felt across the whole of the continent of Europe. Ever since Russia waged war against Ukraine, not only Ukraine but the whole of Europe has faced its wrath. From blankets to generators to weapons, European countries have been funnelling aids to crisis-ridden Ukraine without realising that they are fueling a catastrophe on the continent. In a bid to help Kyiv, the European countries have exhausted their own potential and now they find themselves left ‘tapped out’ of weaponry. However, only France has consistently held off on funding the Ukraine war because of concerns about its nation’s resources.

Unlike other European countries who have been fuelling the war by pouring all sorts of aid into Ukraine, France has stayed firm on its stance. France has been repeatedly accused of not providing enough security assistance to Kyiv as the country has always prioritised its national interests over anything else.

If the figures provided by Kiel Institute for the World Economy are to be believed, Paris ranks eighth in military assistance, far behind the US, the UK, Germany, and Poland, having committed €220 million ($230 million).

Germany has sent weapons and millions in financial aid to Ukraine. Just recently, a fresh shipment of weaponry, packets of winter clothes, and military gear were delivered to Ukraine by Germany. Moreover, the transfer of Iris-T SLM air defence system transfer has also received official confirmation. Unlike countries like Germany which toe the line of the White House in supporting Ukraine, France has always gone all out against the US. While the other European countries are busy following orders from the White House, France has said ‘No’ to any further aid to fuel the war in crisis-ridden Ukraine.

Recently, France unofficially admitted that it is unable to provide Ukraine with more weapons due to dwindling stocks. According to Politico, “Off the record, the French admit they can’t give more weapons to Ukraine due to the state of their own supplies,” the outlet said in its Brussels Playbook briefing on Thursday. It added that Paris “hopes to make up for it with civilian aid.”

It does so amid rumours that the majority of NATO nations have exhausted their supply of arms to send to Ukraine.

According to the article, France is attempting to put together a “conference for Ukrainian resilience this month” as part of its effort to make up for the absence of military aid.

The New York Times claimed last month that some smaller NATO nations “had exhausted their potential” to provide military aid to Ukraine, with at least 20 of the organisation’s 30 members appearing to be “quite tapped up.” Only “bigger friends,” such as France, Germany, and Italy, the journal claimed at the time, could sustain or boost arms shipments.

Read More: France goes all out against Germany for siding with US

It’s not that France never supported Ukraine with aid but when the end of the war in Ukraine seems like a cold day in July, French president Emmanuel Macron has prioritised the country’s national interests.

France knows that funnelling aid to an unending war will do no good to the country, its people and the continent. Evidently, the economy and industries of the countries that came out to help Ukraine are now grappling with an economic catastrophe. Their economy is struggling with declining growth, increasing inflation and an impending recession. Certainly, France did not want to be a part of that list and thus decided not to side with the West.