A “peace plan” for resolving the conflict in Ukraine has been conveyed by Iran to Russia. The plan is placed forward by a ‘European politician’. 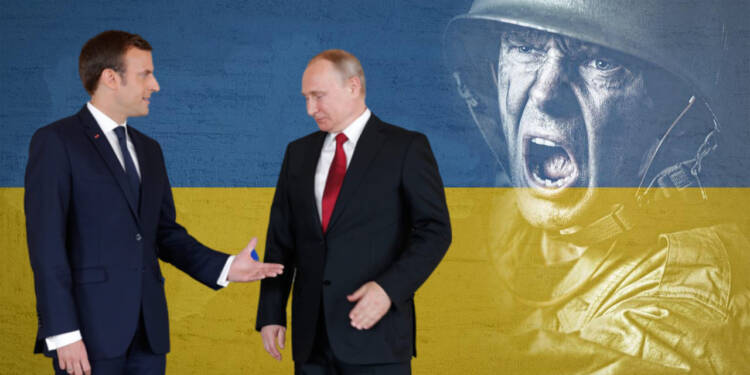 The French Revolution strengthened the power of nationalism and brought France together. The European continent’s ancient structure was destroyed during the Revolutionary and Napoleonic Wars, which sped up the rise of nationalism.

Essentially, France showed the way, and Europe followed. And it’s going to happen once again.

Germany which has always had the edge in Europe has taken a beating after Olaf Scholz became the chancellor. Olaf Scholz is the weakest leader in decades of Germany and hence, it has lost the political clout it enjoyed all this while.

Right now, French President Emmanuel Macron is the tallest leader in Europe. Since the beginning of the Ukraine war, President of France has opted for negotiations with Russia, time and again, unlike other leaders who have financed and prolonged the war. Honestly, the true test of a leader is to bring an end to the crisis and not exacerbate the crisis.

Just recently, a supposed “peace plan” for resolving the conflict in Ukraine has been conveyed by Iran to Russia. The plan is placed forward by a ‘European politician’.

Hossein Amirabdollahian, the foreign minister of Iran, acknowledged that he had given the European plan to Russia. According to Iran’s semi-official ISNA news website, French President Emmanuel Macron is the leader who communicated the message to Tehran.

Amirabdollahian said, “There are ideas to help establish peace and stop the fighting in Ukraine, and I shared these ideas with Mr Lavrov.”

This is not the first time France has offered reconciliation. Even before the Ukraine war, Macron commanded the trust of both Ukraine and Russia. He requested more negotiations.

Amidst the Ukraine war, Joe Biden has made things worse. His recent decision of $2.8 billion in new military and humanitarian aid for Ukraine and Eastern European allies, marks a shift from just-in-time weapons transfers to Ukraine to a longer-term effort.

Not only this but, Pentagon also signed a $182 million contract with arms manufacturer Raytheon to assist Ukraine. US Defence Department last week announced that Raytheon will send NASAMS short and medium-range anti-aircrafts to Ukraine by August 2024.

Adding more to that, the White House has asked Congress to approve USD 13.7 billion in emergency funds for Ukraine. This will further prolong the war.

Biden has overlooked the corruption in the European country and has closed his eyes to the inefficient leadership. Biden knows that if Ukraine loses to Russia, it’ll impact him in the midterms. Not only this, it’ll dent the legacy of Biden and democrats forever. Therefore, he’s not ready to back down.

France will bring an end to the war

France and Macron realise that Ukraine has become the battleground for a proxy war between Russia and the US. And Biden won’t back down. He also understands the economic woes being faced by Europe and its people.

Anti-Russian sanctions have backfired on Europe. Europe’s economy has gone for a toss. Its currency Euro has fallen to the lowest against the Dollar in a decade. Europe’s inflation has rocketed to the highest in the last three-four decades. The gas embargo has put millions of European jobs in jeopardy.

France itself has seen the cut down of gas completely. France’s industries face the threat of gas shortage. Some have already shut down and some had to reduce their output.

Also Read: Europe is locked in an ego war between Putin and Biden. But there is a way out for them

France faces a danger of extreme winter if the energy imports are not restored to levels before the Ukraine war. Therefore, Macron has upped the ante to put an end to the Ukraine war.

Macron apprehends that if Europe doesn’t stand for itself and continues to walk on the path of the US, it’ll lose its standing in the world. Europe better protects its own interests and there is only one way to do it, i.e. putting an end to this meaningless war.

Macron and Putin’s camaraderie is well-known. Putin has always welcomed Macron’s opinion and therefore, a peace offer is a real possibility.

Once the war ends, Europe’s economy would be able to breathe again and things would start to look better. Europe took its time to realize this but, as they say, “It’s better late than never.”