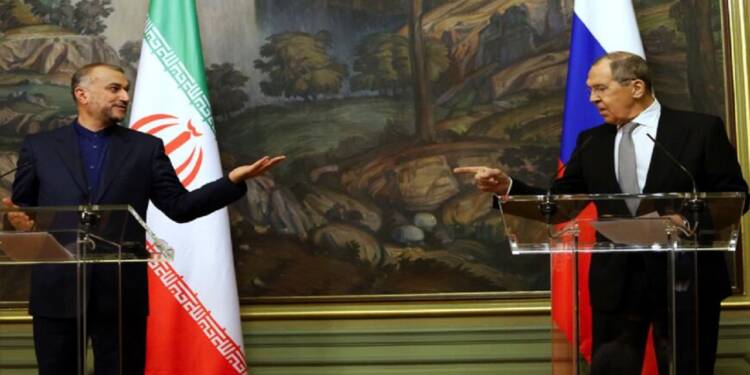 The Ukraine war has become a too heavy a burden for European countries to carry. The cessation of gas supply from Russia, on which almost every European country heavily relies, has sent their economies in jeopardy. Euro has fallen to the lowest against the dollar, in a decade. Europe’s inflation numbers have skyrocketed to the highest in the last four decades.

To save itself from the economic crisis, Europe has pursued Ukraine to negotiate with Russia time and again but, its suggestions have always fallen on Zelensky’s deaf ears. EU’s anti-Russia stance has restricted it to approach Moscow itself for negotiation. Therefore, it’s using the back door and has sent a path-breaking peace offer to Iran.

A supposed “peace plan” for resolving the conflict in Ukraine has been conveyed by Iran to Russia. The plan is placed forward by a European politician.

He did not provide any further information or identify the European leader behind the idea, but he did say that “the proposal addresses the Zaporizhzhia nuclear facility and prisoners of war”.

“There are ideas to help establish peace and stop the fighting in Ukraine, and I shared these ideas with Mr Lavrov.”

What does approaching Iran mean?

Iran and the United States, China, France, Russia, the United Kingdom, Germany had signed the Joint Comprehensive Plan of Action (JCPOA), sometimes known as the Nuclear Agreement, in 2015. However, in 2018, former US President Donald Trump withdrew from the accord and slapped sanctions on Iran to compel it to resume talks, as part of a “maximum pressure” strategy.

The sanctions since then have harmed the Iranian economy. They have made it harder for Iran to export oil and for Europe to do any business with Tehran. However, this peace proposal by Europe to Russia via Iran is a direct betrayal to USA which had sanctioned Iran.

Iran has often delivered messages between Moscow and Kyiv since Russia’s invasion of Ukraine on February 24 of this year. This, though, is the first known instance of Tehran sending a message on behalf of Europe.

Also Read: Europe surrenders before Iran and the IRGC

According to a recent data by Kiel Institute for the World Economy, the six major nations in Europe did not make any fresh bilateral military commitments to Ukraine for the entire month of July. This is a first since Russia’s special military operation in late February.

Europe is racing towards de-industrialization as several companies have already shut down and several are facing the same consequences. The gas shortage faced after Russia cut down 80% of its imports from Nord Stream 1 has forced countries into gas rationing. Energy companies are on the verge of bankruptcy with already $1.3 trillion of debts.

The Political crises in Italy, North Macedonia, and Britain have highlighted the upcoming “European spring’. Thus, Europe understands that the Ukraine war has now been done and dusted with.

Therefore, the EU’s peace offer to Russia via Iran makes sense. According to Iran’s semi-official ISNA news website, French President Emmanuel Macron is the leader who communicated the message to Tehran. However, none of the officials have responded to the story.

Also Read: Global media won’t tell you, but Europe has withdrawn from the Ukraine war

Europe clearly is done with the war. Now, it’s just US standing alone supporting Ukraine. If US continue to support Ukraine, it’d be blamed for prolonging the war.

The only way for Washington to avoid the unnecessary blame would be to take a step back on its military and financial aid to Ukraine. Ukraine then, would be left to fend for itself and would be compelled to come to the negotiation table, once the Western powers stop supporting it. EU’s path-breaking offer to Russia will make the way for peace in the continent.

Ursula picked up Romania and dropped it into The Hellfire