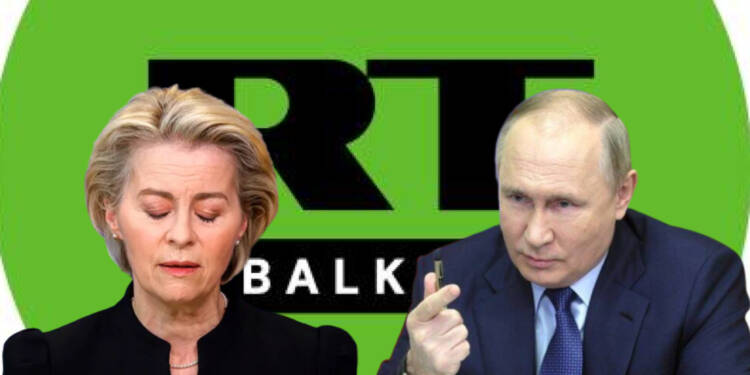 We know how the tussle between the EU and the Balkans is brewing up and nations from both ends are taking retaliatory steps in a show of strength. The EU has been firm on its anti-Russia stance but the Balkans seem to denounce EU’s mandate which is irking the bloc like never before. From denying them accession to EU bloc to migrant assault to controlling their region’s media, the EU has done everything in its power to curdle the blood of the Balkan nations.

The EU has now intensified the rivalry between them and the Balkans by cracking down on the independent media in the Balkans. According to a news report, the RT Balkans channel from Belgrade has been disabled on the Google-owned video site, YouTube. The decision on Monday, which came approximately three weeks after the Serbian-language outlet’s start in a region heavily covered by Western media, was not explained. The ban was announced on Monday night by RT Balkans, who noted that the most recent video posted on the station was their interview with Aleksandr Botsan-Kharchenko, the Russian ambassador to Serbia.

“Why are owners of the Western media space so afraid of RT’s Serbian-language reporting?” the outlet asked. They continued, “Their move mainly speaks about the lack of media freedom in the West, especially since the posts on your YouTube channel in no way violated the company’s rules of conduct.”

The Serbian news website was launched on November 15 with the intention of starting TV broadcasts by 2024. Even though the Google-owned site had previously barred any “Russian” media, RT Serbia was still able to create a YouTube account and upload content.

Read More: Orbán is now in charge of setting the mood against the EU in the Balkans

The restriction was implemented in March in response to requests from the EU to prohibit RT and Sputnik channels within the boundaries of the bloc. The platform has a new policy regarding “verified violent events,” according to YouTube CEO Susan Wojcicki, who spoke at the World Economic Forum in Davos in May. This policy compares “denial or trivialization” of the conflict in Ukraine to denying the Holocaust.

Well, banning the media portal is just another step in the list of all the steps the EU has been taking against the region. Well, this all can be attributed to the results of the recent elections in Bosnia and Herzegovina, especially in the Serb zone, having elected a leader Milorad Dodik, who has a soft heart for Russia. Evidently, as soon as the EU saw the Balkans turning towards Russia, it hit the panic button. In all of Europe, and the Balkans are no exception, a tide of pro-Russian leadership is emerging. Previously, Serbian President Alexander Vucic was all alone in the region, but now Milorad Dodik has joined him in irking the EU in favour of Russia.

Since the early 2000s, the Balkans have been actively participating in European integration but the EU’s mistreatment toward the Balkans, especially the western nations prompted the region to change its attitude towards the bloc.

If one recalls, Bosnia and Herzegovina was named as a potential candidate for EU membership in 2003 together with other countries in the Western Balkans. In 2016, the nation formally applied to join the EU, but, all of a sudden, Brussel’s attitude towards the Balkans took a heinous turn. The EU started mistreating the western Balkan nations as if they are some sort of liability on the bloc. Moreover, the bloc even pushed the region into a migrant crisis. But when the region became furious and started expressing discontent, it got subjected to the brunt of rebelling with the West. The EU is worried that the Pro-Russia wave running in the Balkans will ruin every chance of the Balkans joining the Western bloc and hence it is desperately acting against it.