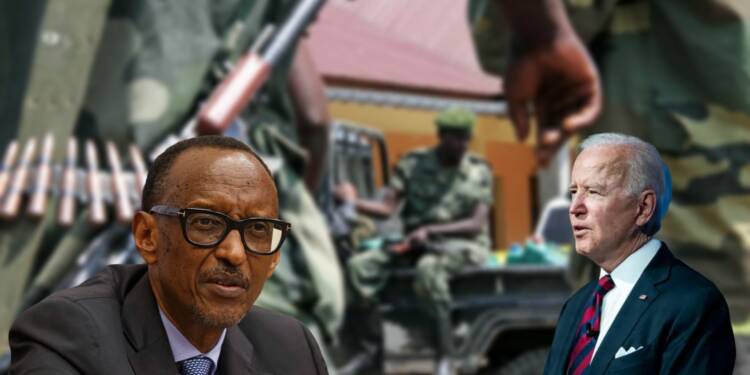 The divisive agenda of the US in DRC is failing. The US has been funding the M23 terror group to create instability in the DRC. On the other hand, despite being in the country for two decades, the UN mission called MONUSCO has not succeeded in ending the conflict in DRC and in fact is hand in glove with M23, a terrorist organization. The UN mission has also seen protests against it by the locals for this reason.

M23 is active in DRC and is also involved in stealing and smuggling of its mineral resources such as gold and cobalt among other crimes such as massacres, kidnappings, mass rape, bombing etc. which have caused severe conflict between Democratic Republic of the Congo and Rwanda.

Rwanda actively finances and backs M23, which has created an extensive network of smuggling of DRC’s mineral resources on the instructions of president Paul Kagame. This is how the whole nexus works in DRC and loots its resources while creating instability in the region.

Now, the African leaders have realised the dangers of the West’s plan to create trouble in the region and they have had enough. Now the African countries are coming together to eradicate terrorism from their land and it’s their unity that has become a nightmare for this infamous nexus which is now facing infighting among themselves.

Only recently, Kenya deployed its first contingent of a regional peacekeeping force to eastern Democratic Republic of Congo to help the Congolese army’s efforts to quell the violence in the region. Besides Kenya, Burundi & Uganda had also sent troops to neighboring DRC to help end decades of instability. Now, South Sudan too has stated that it will send more than 700 troops to the eastern DRC.

However, now the nexus is faltering and losing ground due to the collective efforts of neighboring African countries to fight against this evil and to bring peace and progress in the region. The combined efforts of these countries are now coming to fruition and now M23 is slowly getting eradicated from the region. In the past US has come out in the open accusing Rwanda of backing the M23 rebels and it also denounced Rwanda for doing so. It was because US now realizes that it can’t afford to fund M23 anymore as it is bound to be completely eradicated soon.

So, this nexus is now falling apart. It is further proved by the fact that, Rwanda’s foreign minister has accused the “international community” of exacerbating the crisis in DRC east, after Washington pressed Kigali to end its alleged support for rebels in the restive region.

Now, after both Rwanda and US abandoned M23, which they were earlier backing, the terror group has realized that it will eventually be rooted out by the combined African forces and therefore it is begging for recognition from Felix Tshisekedi, the President of Democratic Republic of Congo. The tables have been turned against this nexus of US-Rwanda-M23, after Democratic Republic of Congo’s President Felix Tshisekedi signed a ceasefire agreement with three West-backed nations which include Rwanda, Burundi and Angola.

Read More: M23 cries for recognition as the West dumps it

Thus, it can be said that the nexus is certainly breaking and now Rwanda is also getting back at the US for trying to throw it under the bus for the crimes and bloodshed unleashed by M23, which the US is also equally responsible for. Call for unity among the African nations has completely thwarted US attempts to perpetually keep the region divided for its own gain and its divisive agenda has received a befitting response.