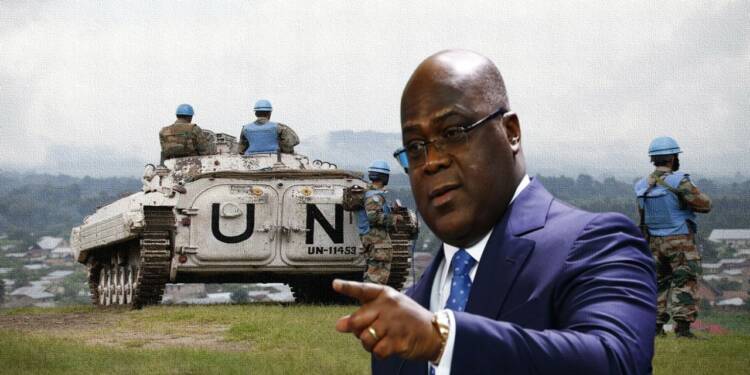 MONUSCO: Former President of France Francois Hollande has called for a more effective presence of the UN peace keeping forces in Democratic Republic of the Congo. Hollande was on a visit to the DRC when he made the statement, ‘I think that it will undoubtedly be one of the responsibilities of the United Nations Secretary General, Antonio Guterres, and also of the French who are in charge of peacekeeping missions, to set up a force that is much more efficient in order to go into combat with the groups that terrorise people”.

The UN mission called MONUSCO has often been criticised by the locals in DRC for failing to stabilise the security situation in the country. Despite being in the country for two decades, the UN peacekeeping mission has not been able to end the conflict in DRC. Time and again people of DRC have protested against MONUSCO, calling on it to leave the country. However, Francois Hollande said this would be a mistake which will work in favour of the terrorists.

UN Mission in DRC: A Danger

Democratic Republic of the Congo and Rwanda have been in conflict for decades over the M23 rebels’ issue. M23 is a terrorist group operating in the east of DRC for years, involved in the stealing and smuggling of its mineral resources such as gold and cobalt. M23 is involved in massacres, kidnappings, mass rape, assassinations, bombings etc. Rwanda funds and backs this group, which in turn is backed by the West.

The UN peacekeeping mission called MONUSCO has been in DRC for decades but the situation continues to remain unstable. East DRC continues to witness the carnage and bloodshed perpetrated by the M23 which has established its control in some areas. The US and the EU have condemned Rwanda multiple times and called on its government to stop funding of the group.

Now, the question arises that if the UN has been involved in working to improve the condition of DRC for so long then why does the M23 continue to become more powerful? Why are the people of DRC still suffering at the hands of Rwanda? How come dozens of war crimes are still taking place in east DRC? The reason being, that Rwanda is backed and financed by the West. Under the guise of providing humanitarian help, the West is actively working with Rwanda in DRC and funding the M23 rebel group. MONUSCO is used as a cover up by the UN for its insidious activities in DRC. There is a systemic smuggling nexus between the West, M23, and Rwanda. The UN forces are used to not only cover up these nefarious activities, but also to transport the smuggled goods. Even a layman can join the dots, put things together in perspective and conclude that the UN peace keeping forces are present merely to facilitate the smuggling of rich resources. Security of locals and maintenance of peace in the region seems to be quite below in their priority list.

Now, the question arises why the West has so much interest in the conflict between DRC and Rwanda. First, DRC voted against Ukraine during the UNSC vote, and is backed by Russia whereas Rwanda voted yes to the resolution because it is supported by the US and the EU. Second, DRC is rich in mineral resources including gold and copper which the US and the EU are trying to get their hands on.

Unlike the government of DRC, the locals are well aware of the nexus between the UN mission and M23. People of DRC have protested against MONUSCO, calling for it to leave the country and criticising its failure to curb the bloodshed. Apparently incidents of DRC locals attacking UN convoys have also been reported. In June, UN peacekeeping members opened fire on two unarmed men in DRC. In July, fifteen locals were shot dead during anti-UN protests and many wounded. In February last year, a UN World Food Programme convoy was attacked which led to the death of three.

This is more than enough to convey to the DRC’s government that the UN is not there to help. DRC needs to get rid of the UN and cut all ties with the West if it wants a peaceful and prosperous nation.

Read more: DRC has a golden future but that future does not include China

Kenya is doing the right thing

Kenyan president’s decision to send Kenyan Defence Forces (KDF) to DRC will work in favour of it. As members of the East African Community, Kenya and Democratic Republic of the Congo realise that only a unified Africa can take on forces working to destroy it. DRC is rich in mineral resources, is the third largest market of Kenya’s Mombasa port, therefore peace has to be achieved for developing their economies. And that peace cannot take place if the West along with its puppet Rwanda is sending M23 to steal DRC’s resources and create terror.

The KDF should join hands with the East African Regional Forces to eradicate the menace named M23. Being from the region, from amongst the people will play an effective role in its success as compared to that of the West because malicious intent would be absent.

Most African countries want peace, democracy, economic growth and self-sufficiency which can only take place if African nations are not fighting among themselves but against their common enemies.