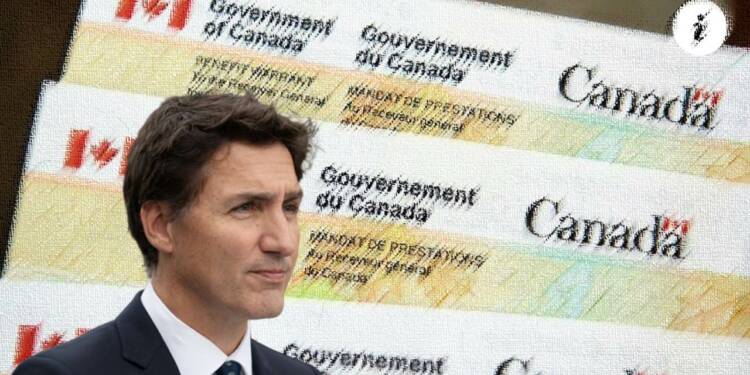 Canada COVID-19 benefit payments: Canadian Prime Minister Justin Trudeau is the only world leader who has repeatedly embarrassed himself in public. Canadians are aware that their prime minister is an egregiously dishonest and crooked individual. Another event has been added to a lengthy list of occurrences when the unfortunate Canadians suffered disgrace because of their PM. There is no escaping Trudeau’s unscrupulous deeds this time; he has stolen billions of dollars from Canadians to fill his coffers.

As per recent reports, Canada’s auditor general said a “minimum” of $27.4 billion in suspicious COVID-19 benefit payments need to be investigated because the government did not manage the aid programs efficiently, and it will likely fail to recover “significant” amounts in overpayments.

That’s in addition to $4.6 billion in confirmed government overpayments solely in double-dipping applications for the various COVID-19 aid programs launched within the first months of the pandemic, according to a new report by Auditor General Karen Hogan.

The report is extremely critical of the government’s management of the programs and ensuing efforts to find and claw back overpayments.

“The Canada Revenue Agency and Employment and Social Development Canada did not manage the selected COVID‑19 programs efficiently given the significant amount paid to ineligible recipients, the limited adjustments as programs were extended, and the slow progress on post‑payment verifications,” the report concluded.

And that’s just the tip of the iceberg. The report chronicles a separate series of eyebrow-raising CERB payments, such as $1.6 billion to individuals who appear to have quit their jobs (instead of losing it due to COVID-19), $6.1 million to incarcerated recipients and $1.2 million in payments to dead people

Who are these “ineligible recipients,” then? Well, it’s possible that you already guessed it. Simply put, Trudeau, along with his cronies, benefited financially from the pandemic. At a time when thousands of underprivileged Canadians were struggling to raise resources to combat the COVID-19 pandemic, how debauched can a person be to partake in such fraudulent behaviour? Not for the first time, evidence of Trudeau’s corruption has surfaced. Since coming to power in November 2015, the liberal poster boy has been involved in a series of scandals and follies. This isn’t the first time that a case of corruption has emerged against Trudeau. The liberal poster boy has experienced a number of scandals and missteps since taking power in November 2015.

The office of the independent ethics commissioner – one of Canada’s top watchdogs – declared in August 2019 that the prime minister’s team had breached ethics rules. The office said Trudeau and his officials had tried in 2018 to undermine a decision by federal prosecutors allowing construction company SNC-Lavalin Group Inc to face a corruption trial. Trudeau said he took full responsibility but declined to apologize, saying he had been trying to save jobs. Trudeau is the only Canadian prime minister formally found to have broken ethics rules.

Besides, Trudeau has also engaged in a number of frauds while disguising them as acts of charity. How the Canadian prime minister inflated his own checkbook by using the controversial Trudeau foundation which has been extensively discussed by us in the past. At the time of his election, it was widely believed that Trudeau stood as the champion of progressive principles, a leader who is compassionate, tolerant, feminist, liberal, and colourful. The only colourful things about Justin Trudeau now, seven years after his election, are his pair of socks.

The average Canadian’s existence is today characterised by historically high unemployment rates, accumulating public debt, inflation, and rising interest rates as a result of Trudueau’s naivete. There are many problems facing the nation right now, including those related to housing, food, and health.

Justin Trudeau, the prime minister of Canada, has long been hailed as a liberal hero, with liberals all over the world gushing over him and wishing they had someone in their country like Trudeau. Since he took power in 2015, there have been countless pieces on prejudiced publishings like Buzzfeed and VOX touting Trudeau as the ideal leader. Seven years later, Trudeau has only accomplished one thing – endangering the lives of his own countrymen and jeopardizing national interest.