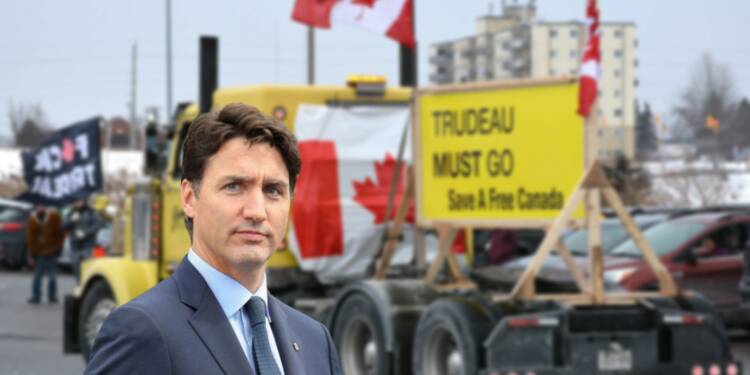 Justin Trudeau is a highly corrupt and incompetent leader. For the purpose of avoiding criticism, the Canadian prime minister is happy to lie to any degree. The ongoing evidence from the truckers’ protest, which called Trudeau and his family to the witness stand, has also demonstrated how the liberal poster boy is an excellent, vicious, and cunning liar. To be honest, though, I think the prime minister is delusional if he thinks he can deceive his own people by donning a false front. With his white falsehoods, he tried everything to sway the public, but his premature strategies fell flat. Alas, Trudeau has run out of lies and is now attempting to use the Canadian justice system to continue his devious game.

The massive protests that resulted from the freedom convoy in February 2022, which compelled the Trudeau administration to exercise exceptional powers and make the first use of the Emergencies Act, have begun to plague the liberal administration.

Inquiries and questions are being made in Canada to determine why the government felt the need to take such extreme and harsh action. Unsurprisingly, the government led by Trudeau has yet again failed to respond satisfactorily.

Although the convoy movement was largely active and peaceful, Trudeau didn’t spare any effort to label the trucker protests anti-national and a security threat to Canada. Brutally suppressing the Freedom Convoy, Trudeau believed he could get away with it. He hoped that his reputation as an unmatched human rights defender would endure. Sadly! At least in this instance, Trudeau isn’t living the life of his dreams. The day of Trudeau’s verdict appears to have come and the infrequent use of emergency powers isn’t looking well for the liberal leader.

The Public Order Emergency Commission recently ended its fact-finding sessions after six weeks of testimony, several witnesses, and after seeing it all, it’s even clearer than it was in February that using the Emergencies Act to repress what was ultimately a peaceful rally was a needless overreach.

Since it was never acceptable to image-conscious Trudeau for the world to know about his dictatorship mindset, he latched onto lies for months to rationalize his authoritarian practices throughout the protests. Trudeau now possesses nothing to vindicate his actions, though. Thus, the liberal poster boy is now relying on his cronies at the court of law to help him get out of this mess.

Recently, an Ontario court has rejected a request from two “Freedom Convoy” organizers to release $200,000 of frozen funds to pay for lawyers to defend a lawsuit launched on behalf of Ottawa residents and businesses.

B. J. Dichter and Chris Garrah are among a long list of defendants named in the potential class-action lawsuit filed in February, seeking damages for “civil nuisance” caused by truck horns, diesel fumes and other disruptions to residents and local businesses during the protest in January and February.

In a motion, Dichter and Garrah asked for access to some of the money donated to the convoy through crowd-funding platform GiveSendGo, cryptocurrency transfers and other sources, so they could mount a defence.

But Justice Calum MacLeod on Tuesday denied that request, saying it would violate the agreement between the plaintiffs and other defendants to move about $5 million in donated funds into escrow, pending resolution of the lawsuit.

Both Dichter and Garrah claimed in court that they had limited income and minimal assets and were unable to pay a $200,000 retainer for lawyer Jim Karahalios to defend them.