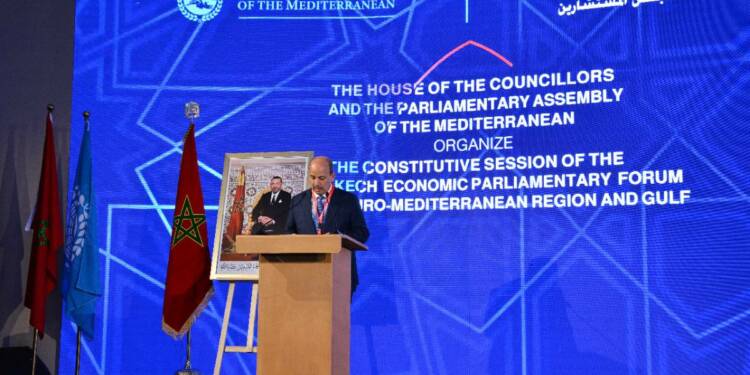 The Russo-Ukraine war has skyrocketed the importance of the resource-rich Africa. Gasping for oil and energy supplies, the Western nations have started a neo-scramble for Africa. But every attempt they have made to win over the African countries has failed miserably. So, they began robbing resources from Africa. However, African countries have made it clear that they will no longer allow the West to stymie their prosperity.

As per recent reports, the first edition (constitutive session) of the Economic Parliamentary Forum for the Euro-Mediterranean Region and Gulf, initiated by Morocco’s House of Advisors and the Parliamentary Assembly of the Mediterranean (PAM), kicked off in Marrakech.

This high-level meeting, attended by parliamentarians from more than 30 countries as well as government officials, public and private sector actors, academics, experts, businessmen and representatives of civil society, is an opportunity to strengthen cooperation between the two geographical areas and to intensify efforts to address common challenges, leading to economic growth and the preservation of peace and security in the region.

Thus, the Forum serves as an important conduit for parliamentary diplomacy and a significant platform for discussion of the most critical economic and environmental concerns in the Euro-Mediterranean and Gulf Regions.

The forum’s organisers hope to achieve a fundamental change in addressing the major social and economic challenges of climate change through the forum’s thematic sessions. They also hope to encourage more effective economic integration in the region to help it withstand exogenous factors, as well as the expansion of the South-South trade network and the development of an integrated self-sufficient green energy production and marketing area.

The Forum also aims to promote the development of a more integrated economic and financial zone, while ensuring the implementation of more sustainable practises and a transition to green energy, which can lessen the effects of climate change and increase the region’s energy independence. The Forum also proposes practical solutions to improve resilience to challenges and crises (food, fuel, fertilizer, etc.), and to better prepare the countries of the region to cope with potential future challenges.

The fact that Morocco, an African nation, is hosting this conference is evidence of the confidence that Africa has as a significant player in the modern geopolitical landscape. Don’t be fooled—African nations commanded this convention, which was intended to convey Western nations how tenacious and united Africa is becoming.

African countries have joined hands to strengthen the continent’s economy. For instance, the Central African countries have recently agreed to establish a regional oil and gas pipeline network in an effort to boost their energy security and move toward economic self-sufficiency. This will also lessen their reliance on imported refined petroleum products from the West.

Besides, the East African Community has also been leading the charge against Western imperialism in its own unique manner by maintaining an unprecedented level of surveillance over the immoral acts that Western countries engage in on African soil

African countries have begun efforts to capitalise on its extensive resources and modernise dilapidated roads and trains to support expanding economies. Without a doubt, these projects would augment energy availability and open a new episode in Africa’s quest with economic development. A unified, potent Africa is in the making.