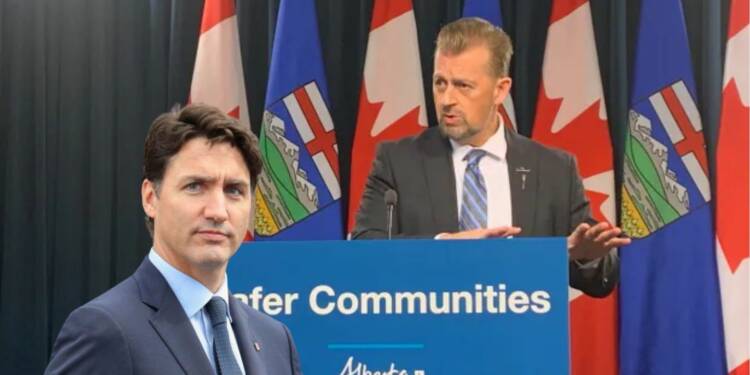 RCMP in Alberta: Canadian PM Justin Trudeau is gradually endeavoring to overhaul the fundamentals of Canadian governmental system. Invasion of privacy should not be tolerated in a democracy like Canada, but Trudeau is so intoxicated with the power that he has forgotten the very moral code that underpins contemporary civil societies.

Trudeau can’t stomach the core idea of marble cake federalism. He has repeatedly attempted to consolidate power in Canada while blatantly ignoring the constitutional guarantees outlined in the Constitution. The RCMP and other federal law enforcement organisations have been used by the Canadian government to enforce liberal values and target conservative strongholds across Canada.

The provinces, though, have opposed Trudeau valiantly. For instance, when it comes to Trudeau’s tyranny, Albertans have consistently stood against it. They have always fought against his despotic autocracy. And now Alberta is creating a force that is strong enough to neutralise all malicious activities of Trudeau.

The Alberta government is proposing an independent commission to oversee complaints against police officers from across the province.

The RCMP has not yet agreed to be subjected to the proposed commission, according to government officials. The complaints process would still include the Edmonton Police Service, Calgary Police Service and the Lethbridge Police Service and instead of complaints against officers being dealt in-house by such services, the province is aiming to have independent oversight of the process under one entity.

The independent review commission is about 18 months away from becoming a reality and is part of a package of amendments being brought forward under the United Conservative Party Government’s Police Amendment Act.

“In our many discussions with Albertans, one thing that came up consistently was the need to change how complaints against the police are investigated — to end the system of police investigating police,…” Alberta Public Safety Minister Mike Ellis told a news conference.

The Alberta Serious Incident Response Team (ASIRT), which has spent years looking into serious incidents like deaths in jail, would be placed under the supervision of this commission, which would also receive, look into, and make decisions on complaints.

Municipal police force commissioners may also be appointed by Alberta’s minister of public safety, with the number of appointments being determined by the size of the commission. The minister can also be asked to intervene if a local disagreement arises.

The minister can also set provincewide policing priorities under the changes. Police commissions must set their own priorities while taking the provinces into consideration, and police services must report annually about their progress.

Simply put, Albertans have now resolved to abolish the RCMP and have developed a plan to establish their own police force in its place. This must have sent chills down Trudeau’s spine.

We’ve gone into great detail in the past on how Trudeau has employed the RCMP to gradually destabilise the leadership in provinces that house the conservative party, like Alberta. When it pertains to oil, Alberta is Ontario’s treasure. Additionally, the province serves as the national hub for the right-wing political movement. As a result, Trudeau is eager to seize any opportunity to demolish the idyllic image of Alberta.

It is unethical and unlawful to employ a federal agency to carry out political ambitions. The made-in-Alberta police would therefore act as superior law enforcement for the region, enhancing quicker reaction times by using small detachments and bigger hubs. Since the RCMP is no longer subject to provincial oversight laws, it is only kosher for Alberta-run provincial forces to take over the RCMP’s duties in the near future.