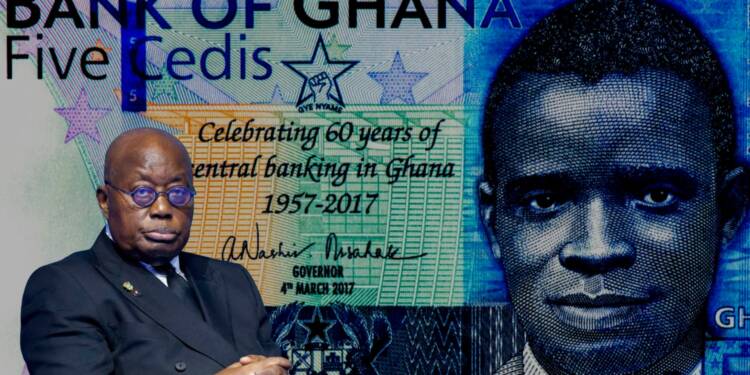 Ghana is going through an unparalleled crisis that is characterised by debt hardship, currency devaluation, and dwindling foreign exchange reserves. In such a situation, Ghana’s government has chosen to act to reduce its dependence on US dollars. This might alter the economic history of the African nation.

Ghana’s central bank has laid out relief measures for banks that participate in the government’s domestic debt exchange in a bid to allay their worries over its potential impact.

The West African country, which is going through its worst economic crisis in a generation, recently launched a plan to exchange its local bonds for new ones with fresh maturity dates and coupon rates to help restore macroeconomic stability.

The central bank’s letter outlines certain relief measures, such as lowering the cash reserve requirement ratio on cedi deposits to 12% and changing the risk-weights for new bonds from 100% to 0% for determining the capital adequacy ratio.

The west African nation that produces oil, gold, and cocoa hopes to reduce its debt-to-GDP ratio from 100% to 55% by 2027 as it battles to make interest payments that, according to the finance minister, now account for 70% to 100% of income.

To be clear, this is a continuation of Ghana’s policy to abandon US dollars in favour of gold. The Ghanaian government has stated that it is thinking about adopting a strategy whereby it will pay for oil products with gold rather than US dollars.

The country’s remaining U.S. dollar reserves are not adequate to cover the expense of importing oil for more than three months (from USD 9.7 billion at the end of 2021 to USD 6.6 billion in September 2022).

The measure aims to counteract Ghana’s declining foreign exchange reserves and reduce importers’ demand for dollars, which is contributing to the cedi’s depreciation and an accompanying economic crisis.

The local currency is weakening and living expenses are rising as a result of the shrinking foreign exchange reserves and the need for dollars from oil importers.

The new policy would therefore fundamentally affect the balance of payments and greatly minimise the persistent erosion of the Ghanian currency.

Without a doubt, the US dollar has long dominated the world’s financial system. Depending on the national rules, central banks retain about 60% of their foreign exchange reserves in dollars. It serves as the basis for more than half of all international loans and global debt securities.

In an effort to curb global inflation, the US Federal Reserve raised interest rates earlier this year. According to the Biden administration, this action will deter businesses, governments, and families from taking on more debt, which will help in lowering inflation.

The decision had negative effects on Africa, nevertheless, as its central banks were forced to raise interest rates in order to prevent their national currencies from depreciating further and making it more expensive for African countries to purchase dollars.

Ghana’s currency is in fact depreciating as a result of its dollar buying blitz. The move has squeezed the local currency market aggravating the cedi’s devaluation, according to JP Morgan, the investment bank. The cedi has lost at least 52% to the dollar this year (as of Oct. 20) making it the worst performing of 148 currencies tracked by Bloomberg.

JP Morgan said the BoG’s decision to buy dollars off mining companies reduced foreign exchange availability within the interbank market, according to local media quoting the global firm: “To reduce volatility, we believe the BoG may need to use proceeds from mining sector FX purchases to increase interventions, or alternatively, reverse the FX purchase policy.” (sic)

Recently Ghana also decided to trade the oil in gold in place of petrodollars in order to ease the over dependence of its economy on dollars.

The current actions represent a fundamental change in Ghana’s economic strategy. Ghana is committed to taking positive steps to de-dollarize their economies. This will undermine the dominance of US dollar in the global economy and eliminate the hegemon’s finest geopolitical tool.