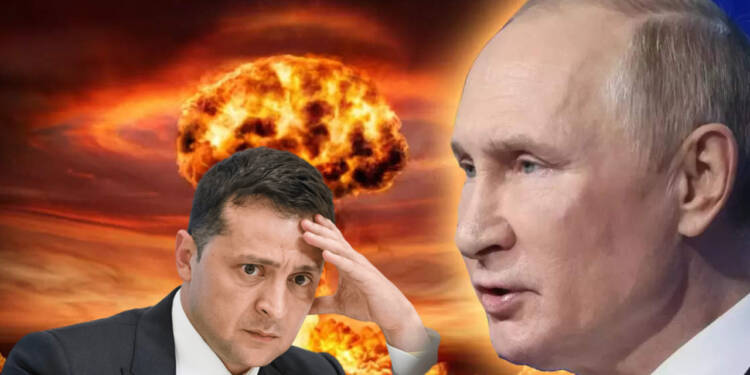 More than 10 months into the war, the US is still not over with its tactical manoeuvres. It has been more than 10 months of military aggression wreaking havoc around the world. Most of the Western and European countries have started pulling out of the war in Ukraine but Washington is busily prolonging it. Washington has consistently stoked the conflict between the two belligerent countries, and its efforts have been so impactful that they have now forced the two nations into a nuclear conflict.

It was just a few days ago when the US president Joe Biden, sent out a bone-chilling warning to the entire globe, accusing Russia of planning to launch nuclear strikes to bring about an “armageddon.” And guess what? It is happening.

The US Department of Defence, Pentagon has now given a tacit endorsement of Ukraine’s long-range attacks on targets inside Russia. This comes following President Putin’s many missile attacks on Kyiv’s vital infrastructure.

The Pentagon has updated its threat assessment of the war in Ukraine since daily attacks on civilians started in October. Importantly, this also involves fresh assessments of the possibility that Russian and NATO forces will clash militarily as a result of the arms transfers to Kyiv.

“We’re still using the same escalatory calculations but the fear of escalation has changed since the beginning,” a US defence source told The Times. “It’s different now. This is because the calculus of war has changed as a result of the suffering and brutality the Ukrainians are being subjected to by the Russians.”

The possibility of a major escalation as a result of fresh long-range strikes within Russia no longer worries Washington. To date, all of Moscow’s retaliation attacks have been using conventional missiles to hit civilian targets. The Pentagon had previously been more wary of Ukraine attacking Russia because it thought Moscow may respond by using tactical nuclear weapons or by hitting other Nato countries.

However, Washington does not want to be seen publicly giving the green light to Kyiv attacking Russian soil. It just wants to silently push the fragile Ukraine into the mouth of the behemoth Russia.

We’ve been seeing that the US has been engaging extensively in the war by sending the nation’s most important arsenals to the battlefield and now finally it has given tacit approval to Ukraine for drone strikes in Russia.

US president Joe Biden has previously been castigated several times for peddling fake warnings that the world is at risk of a nuclear “Armageddon.” Ever since the war started, Joe Biden has been the panic creator. But now, he is pushing the already war-torn Ukraine into a state of total devastation.

The Pentagon’s assent will do nothing but activate Russia’s ‘dead hand’. And is the world in a state of facing Russia’s world-ending mechanism? The USA inconsiderately gave its assent to Ukraine but then it should also be ready to face the wrath of the nuclear power Russia. The Soviet Union devised a world-ending mechanism that when the need arises, it would detonate all of its nuclear bombs without the need for any human intervention.

Russia now has approximately 1,600 tactical nuclear weapons deployed, with an additional 2,400 strategic nuclear weapons linked to intercontinental ballistic missiles. This makes Russia the world’s largest nuclear power. All of these warheads are linked to the Perimeter, the control of a nuclear weapon system that operates automatically.

In the event of a crisis that could result in a first strike by the US, high-ranking government officials or military leaders could activate the Perimeter. The Perimeter would ensure that the Soviet Union (and, more recently, Russia) could respond even if its whole military forces were destroyed.

Joe Biden is testing Russia but once Putin hits the button, not only Ukraine but the whole world will pay the price.

Biden deserves a lot more criticism, because, at the moment, the entire European continent is already living in fear. As if all the scaremongering by Joe Biden wasn’t enough, he is now green-lighting Ukraine for drone strikes inside Russia which will ring the country’s death knell.