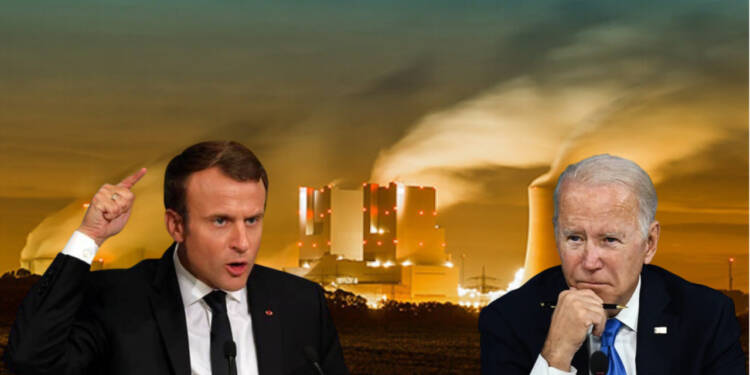 In the rambunctious meeting of the G7 leaders in Germany, France’s president muzzled out some time to take US counterpart Joe Biden to the sidelines for some quick talk. In a rush to picture the special moment, the shutter sounds went reverberating wildly throughout Elmau Castle, in Kruen near Garmisch-Partenkirchen, Germany. But the details that emerged from the quick talks held between the two global leaders are sure to weigh more significance than the image taken.

“I had a call with MbZ,” Macron was heard telling U.S. President Joe Biden on the sidelines of the G7 summit, using shorthand for UAE leader Sheikh Mohammed bin Zayed al-Nahyan. “He told me two things. I’m at a maximum, maximum (production capacity). This is what he claims.”

“And then he said (the) Saudis can increase by 150 (thousands barrels per day). Maybe a little bit more, but they don’t have huge capacities before six months’ time,” Macron said.

Kremlin in the recent past has upped the game by blocking the transfer of gas and the greatest sufferer of all was Europe. A long winter to fight ahead, Europe is bereft of any support nor they can find out any suitable alternative to Russian gas. So, being at the helm of affairs within the EU, the onus also resides on Macron’s shoulder to carve out an apt path to survive the winter.

“In light of recent media reports, I would like to clarify that the UAE is producing near to our maximum production capacity based on its current OPEC+ production baseline,” said Energy Minister Suhail bin Mohammed Al Mazrouei.

UAE produces 3 million bpd and has a capacity of 3.4 million. This beckons a disappointing sign that Europe should seek other alternatives to meet their demand of 2 million bpd of Russian crude and some 2 million bpd of refined products it had been importing from Moscow before the Ukraine war.

The pertinent need to find a Russian alternative has urged the French president to lay his eyes on the barred oil havens of Iran and Venezuela. The international community should explore all options to alleviate a Russian squeeze of energy supplies that has spiked prices, including talks with producing nations like Iran and Venezuela, a French presidency official said on Monday.

“So there is a knot that needs to be untied if applicable… to get Iranian oil back on the market,” the French official told reporters, speaking on condition of anonymity. “We have Venezuelan oil that also needs to come back to the market.”

US list of sanctions on Iran and Venezuela is a legend in itself. And with every passing year list of sanctions is only getting widened. Europe has always nestled under the authoritarian wings of the US. Under Macron that notion saw a change but Europe found it particularly difficult to amble out completely from the dominant grip of USA.

Now with the energy crisis reaching a crescendo, it is time to act. It has striked on Emmanuel Macron’s mind and under the garb of big talks with Biden at the sidelines, it was just macron giving an ultimatum to Joe Biden and his cohorts.

If not siding up with the US, Europe by large could have easily inked a deal with either Iran or Venezuela. Time has now fallen for Europe to muster the nerve to untangle itself from the shackles of USA. G7 just gave the start.

US was surviving on Ecuadorian oil. Russia has shut it down as well

A popular uprising is about to hit Germany very soon