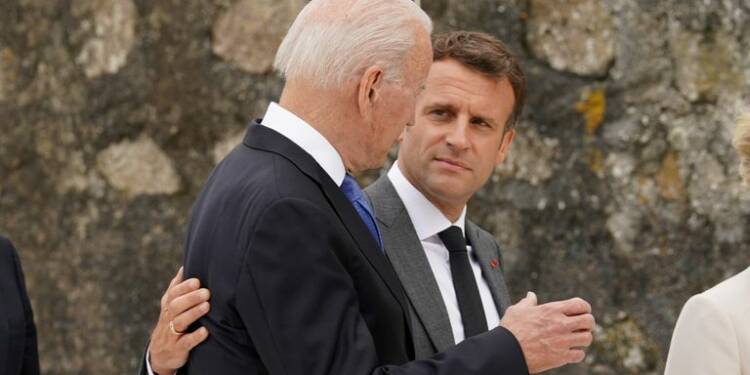 US President Joe Biden doesn’t have the temperament to lead American diplomacy and foreign policy. You often see him transgressing the limits of diplomatic courtesy. This time around the 79-year old leader ended up calling his Russian counterpart “a butcher”. Well, do you think calling Putin a butcher will stop the war or help the EU calm the situation? The answer is no! Instead, his comments could very well fuel the fire in Ukraine. And Macron has now hit out at Biden for the same reason.

Biden had actually gone out of his way to dub Putin a “butcher” who “cannot remain in power”. His remarks had triggered fears that the Biden administration was looking for a regime change in Moscow. The White House, however, tried to deny that.

The Kremlin however made it clear that Biden’s remarks could hurt bilateral ties.

Meanwhile, Macron, who shares an embittered relationship with Biden following the AUKUS fiasco, was clearly left baffled by Biden’s provocative remarks against Russia.

Talking to broadcaster France 3, Macron said that he aimed at “achieving first a cease-fire and then the total withdrawal of (Russian) troops by diplomatic means.” He then warned, “If we want to do that, we can’t escalate either in words or actions.”

In line with his policy of pursuing an independent EU policy, Macron hasn’t followed the Biden administration’s agenda of shutting communication with Russia.

France has kept diplomatic channels with Russia open during the ongoing Russia-Ukraine war.

Earlier this month, Macron tweeted, “It is vital to maintain dialogue to avoid human tragedy. I will continue my efforts and contacts. We must avoid the worst.”

I spoke to President Putin this morning. He refuses to stop his attacks on Ukraine at this point. It is vital to maintain dialogue to avoid human tragedy. I will continue my efforts and contacts. We must avoid the worst.

He added, “Maintaining dialogue to protect the people, obtaining measures that will avoid human tragedy, putting an end to this war: this is the purpose of my commitment alongside President Zelensky and the international community. I am and will remain fully determined.”

Recently, Macron also said that he would call Putin on Monday or Tuesday in order to discuss a proposal from France, Greece and Turkey for evacuating Ukrainians from the port city of Mariupol that has been encircled by the Russian armed forces.

Maintaining dialogue to protect the people, obtaining measures that will avoid human tragedy, putting an end to this war: this is the purpose of my commitment alongside President Zelensky and the international community. I am and will remain fully determined.

Macron therefore has a clear agenda—pursue diplomacy, stop the war, and emerge as the tallest leader in the European Union. Biden’s brash remarks, however, tend to derail Macron’s plans.

Read more: Emmanuel Macron emerges as the unintended winner of the Russia-Ukraine conflict

How can you make a politician angry? Well, just try to sabotage their plans ahead of elections and you will have them fuming. This is exactly what Biden has done to Macron.

Macron is all set to go to the Presidential polls in a little over 10 days. He is the front-runner, and French citizens are most likely to re-elect him.

The French President is trying to show that he is a strong, independent leader who can put Paris in a position to resolve Europe’s problems. Add to it, Macron’s past remarks about forming a European army, pursuing strategic autonomy and ending the era of security dependence on the US, and you realise that Macron has a grand vision for France and the EU.

This is why we also see a lot of political messaging from the French President. The Élysée Palace for instance released images of a stressed Macron following his call with Putin earlier this month.

The Élysée Palace released images of French President Macron after his call with Putin today, regarding the invasion of Ukraine. 🇫🇷🇷🇺🇺🇦 pic.twitter.com/I1uOgNMuma

And guess what, Biden just tried to sabotage Macron’s grand plans that I just told you about. The French President had every reason to be angry with Biden’s “butcher” remark. And it seems that Macron has now communicated a loud and clear message to Biden—stop fanning the flames in Europe.