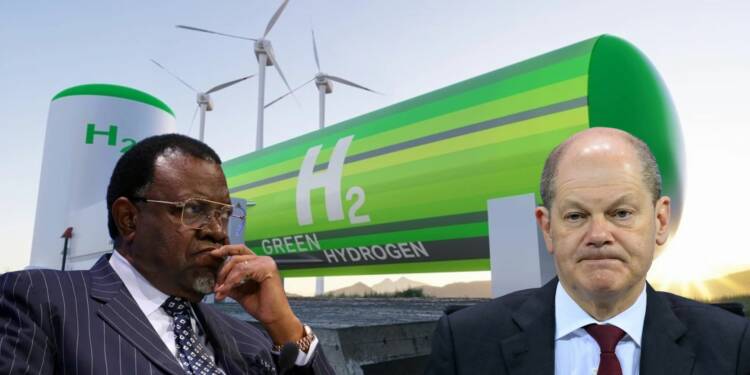 Germany Green Hydrogen economy: Ever since the Ukraine-Russia crisis, Europe is battling an energy crisis that is worsening. European natural gas prices increased by nearly 70%, and crude oil prices surpassed $105 per barrel for the first time since 2014, according to reports.

This is what, Western sanctions against Russia and subsequently Russia’s decision to halt gas exports to some EU member states have done to the continent. And now, with an energy security crisis the European leaders have no choice but to beg their way into Africa, which can be an alternative energy supplier for Europe.

Mr Habeck is pursuing Namibia’s hydrogen that could be shipped to Germany as the European country is considering green hydrogen as potential fuel for their energy transition.

“If you have energy to spend — and I know that conditions are great and wonderful in Namibia — then there is a European interest,” he told Namibian President Hage Geingob.

Germany is reliant on Russia for its energy needs. But since the Ukraine war broke out it is looking for alternative suppliers.

Green hydrogen fuel is also central to Germany’s goal of having a carbon-neutral economy by 2045.

There is no firm agreement yet for Namibian exports to Germany, but Mr Habeck signed an initial memorandum of understanding in Windhoek.

Germany goes to Namibia after failing in India

Recently, the German foreign minister Annalena Baerbock made her first visit to India in the backdrop of the Ukraine-Russia crisis. Cooperation in the energy transition away from oil, coal and gas was also expected to be a part of discussions with India as per reports. Further, Baerbock also sought closer co-operation with India on trade and climate change. However, she could not extract a promise from India to stop buying Russian oil or respect a $60 per barrel price cap introduced by G7 countries.

During a press conference, India’s Foreign Minister S Jaishankar strongly stated, “The oil imported in the European Union [from Russia] is six times what India has imported,” and “Gas is infinity times because we don’t import.” (sic)

He showed mirror to the West and called out its hypocrisy by stating that it was wrong for “Europe to make choices which prioritise its energy needs, and then ask India to do something else”.

After failing to dictate to India, now Germany went to Namibia to secure its interests.

Read more: Namibia can switch off the lights in Europe whenever it wants to do so

Germany at the mercy of Namibia

When we go in the past, Germany was the colonial ruler of Namibia from 1884 to 1915. It formally apologised last year for its treatment of the Herero and Nama people in a 1904-08 war, accepting it amounted to genocide.

The European fuel crisis has put Africa in an advantageous position today. Throughout the war in Ukraine, Namibia has shown its allegiance to Russia. Previously, Namibia abstained with 15 other African states when the UNGA voted to condemn Russia for its war against Ukraine.

Namibia’s loyalty to Russia could become a stumbling block to any ties with Germany and it could potentially worsen Germany’s energy security crisis. Today, Germany no longer can dictate Namibia in any manner. Namibia being an African state has abundance of sunlight and wind energy which can be utilised to produce green hydrogen which will ultimately warm up Germany houses in winters.

Time has come full circle and today it’s Namibia who holds the bargaining chip leaving its former colonizer at its mercy.