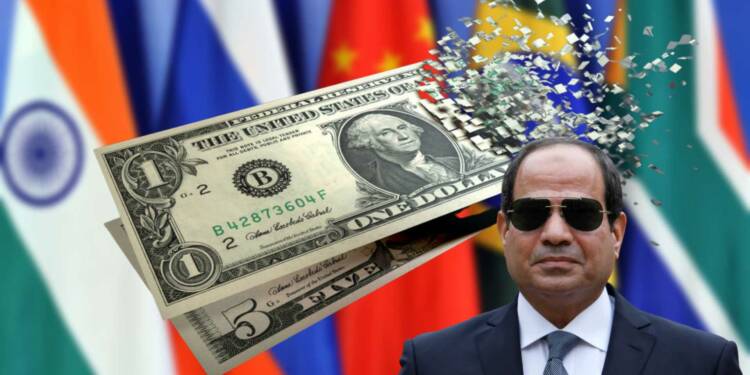 It is widely known that how the United States uses its economic clout to achieve foreign policy goals. The world has seen the US often imposing sanctions on countries that don’t align with its interests. The dominant role of the petrodollar in the global economy also provides the opportunity to exert significant influence over other economies.

However, now more and more countries in the world are joining the “de-dollarisation” campaign. Major economies like India, China and the EU bloc are important players in this already. Now it looks like Africa too doesn’t want to be left behind. In a significant development Egypt has now joined the New Development Bank of BRICS.

De-dollarisation is the process of reducing the dollar’s dominance in global markets by substituting US dollar as the currency used for Trading oil and/ or other commodities, buying US dollars for the forex reserves, bilateral trade agreements, dollar-denominated assets.

Since the establishment of Bretton woods system, the US dollar is used as the medium for international trade. However, in recent years, several countries such as India, China, Australia, Russia among others are transitioning to trade in national currencies.

Egypt has recently ratified its participation in the New Development Bank which was created by Brazil, Russia, India, China and South Africa (BRICS) in 2014. Thus, Egypt becomes the second African country to join the BRICS New Development Bank. With this BRICS’ de-dollarisation campaign gaining momentum. Some BRICS states have already switched to local currencies in order to reduce their dependence on the U.S. dollar and Euro. BRICS is working to develop its own financial infrastructure, including a joint payment network. In this backdrop, Egypt joining the BRICS bloc only further boosts the campaign.

The Covid-19 pandemic and subsequently the Russia-Ukraine war have taught the world the importance of self-reliance.

While Russia and China is leading the de-dollarisation initiative, thanks to their geopolitical rivalry with the US, India, Brazil, and South Africa have also supported this initiative to alter the global financial system for their own interests.

The de-dollarisation is driven by the desire to insulate the Central Banks of the member countries from geopolitical risks. Currently, about 60% of foreign exchange reserves of central banks and about 70% of global trade is conducted using the petrodollar.

The U.S. accounts for about 20 percent of the world’s economic output, however, more than half of all global currency reserves and trade is in dollars. There are concerns regarding how the US has weaponised dollar to secure its interests. The power of dollar is used by the US to target people, entities, organizations or an entire country through sanctions.

In countries like Nigeria and Somalia the strong dollar is responsible for soaring price of imported food, fuel and medicine. It also doesn’t bode well for debt-ridden countries like Egypt and Kenya as they are being pushed towards bankruptcy due to strengthening dollar.

There are efforts for the possible introduction of a new Russia-China payment system, bypassing SWIFT and combining the Russian SPFS (System for Transfer of Financial Messages) with the Chinese CIPS (Cross-Border Interbank Payment System).

India has also explored plans to reduce its dependence on the dollar in the past. In 2012, India’s Ministry of Commerce and Industry brought together a task force to analyze the idea of using the Indian Rupee in India’s bilateral trade, especially recommending the idea of utilizing the rupee to trade with oil exporting countries. Further, since Russia faced western sanctions, India is also exploring Rupee-Ruble mechanism for trade with Russia.

Although it is too soon to conclude whether such a coalition will be effective in de-dollarisation of the global economy given the geopolitical concerns of the respective countries however, in the times of changing global geopolitics it has become like a shared priority for an increasing number of countries to address US dollar hegemony and to reduce the currency shocks caused by the US dollar. Many more countries like Argentina, Algeria, Iran, Indonesia, Turkey and Saudi Arabia are showing interest to join the BRICS bloc. After Egypt being the latest entrant in the bloc it looks like the de-dollarisation campaign will be supported by Africa.