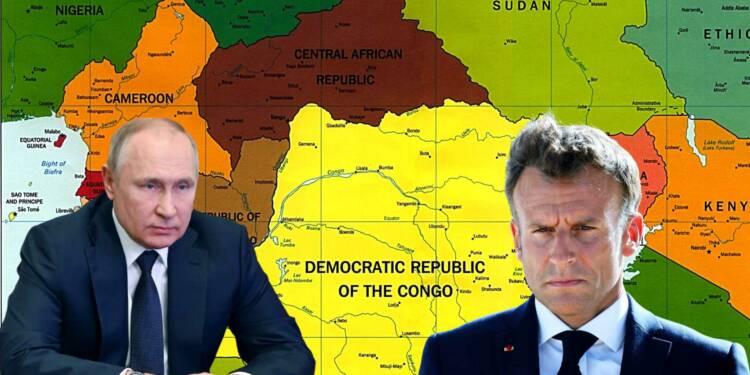 The West has maintained its dominance in troubled regions of Africa in the name of military and/or financial assistance, for a long time. However, with Russia increasing its influence in Africa coupled with a growing anti-west sentiments the west is rattled and is forced to leave the region. Now, Russia is once again about to unleash its wrath on western puppets and free Central African Republic of any western influence.

Russia backed mercenary group, Wagner, is increasing its influence and uprooting the West from many African countries like Mali and the Central African Republic.

Since 2016, the Russian mercenary footprint has grown from four nations to a total of 28, according to the Center for Strategic and International Studies in Washington, eighteen of them are in Africa.

This has perturbed the West so much that they seem to have unleashed their puppets in the region against Russia and Wagner to revive their dominance. Recently, The Central African Republic said that an unidentified aircraft bombed its troops and Wagner troops deployed in the base. There are reasons to believe that the attack may have been carried out on the US’ instructions.

Russia to unleash its wrath

After this ghastly attack, the Central African government had warned of retaliation.

Now the Central African Republic (CAR) with support of Russia seems to be preparing to uproot the West from its territory once and for all. Followed by this, France is pulling out from CAR, ending its seventh military intervention, named Sangaris.

The former colonial power, dispatched up to 1,600 troops to the CAR after a coup in 2013 unleashed a civil war. However, friction had been growing between France and CAR over a mounting Russian military presence. CAR President Touadera had brought in Russian paramilitaries to help him fend off rebel groups advancing on the capital in December 2020.

The departure of the French troops from CAR comes four months after the exit of French troops from Mali, also because of Russia. Mali had also chosen to use the services of Russian instructors to help secure the country, amid growing anti-West sentiments in the country. It shows CAR is the latest blow to western influnce in the region.

Recently the Founder of Wagner, Yevgeny Prigozhin, accused France of attempting to assassinate the head of a Russian representative office in the Central African Republic, who was seriously injured after opening a mail bomb.

After all this, Russia is only likely to retaliate against the Western puppets.

France must have already sensed this and therefore its last troops have left the CAR to avoid Russia’s wrath.

Gone are the days when the US maintained its dominance in the resource-rich Sahel region. However, with Russia’s growing influence in the region the West is forced to leave one country after another across the continent especially in Central Africa.

Similarly the latest coup in Burkina Faso, saw young people waving Russian flags in the streets of the capital, Ouagadougou, which have prompted speculation that there may have been some Russian involvement. Shortly after seizing power, Capt. Traoré made it clear he wanted to work with new international partners to push back Islamist militant groups, signalling a possible “alliance” with Russia. Thus, France’s dreams of being a major player on the world stage are ending. The CAR lost its faith in France because of its inaction when the Islamist rebels earlier threatened to sack the capital Bangui, further paving the way for growing Russian influence. Now many countries in the Sahel region see Russia as a reliable ally in the struggle against Islamic terrorism as the West’s military interventions have largely been unsuccessful. Russia’s wagner, on ther other hand has been successful in eradicating Islamist terrorism from the region.

Trust in Russia is increasing rapidly and more and more African countries are likely to turn to Russia to deal with their security situation. Thus it can be believed that in the coming days, Russia is only likely to advance further and completely drive out the West from Africa.