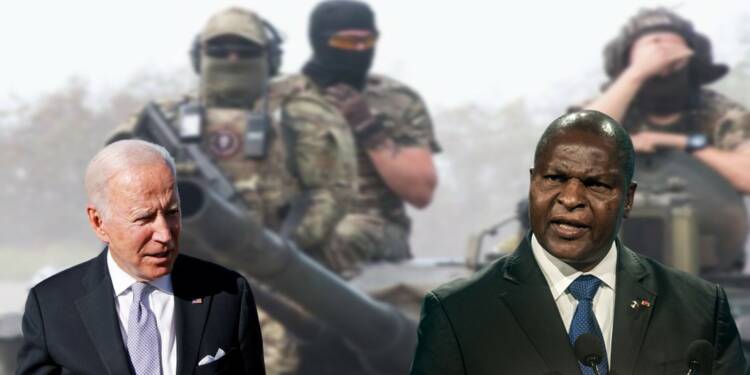 Small rogue nations are the last hope of the West in Africa, as players like the Central African Republic and Mali are establishing their ties with Russia. Hence, Biden is trying to revive the West’s dominance in the region. The latest incident involving CAR’s army and Russia backed Wagner Group might be a glimpse of the wider strategy of the West in Africa.

The Central African Republic is planning to retaliate after an unidentified aircraft bombed CAR troops and their allies known as Wagner Group which were also stationed in this camp.

Before taking off from CAR, the government claims the plane “dropped explosives on the town” of Bossangoa in the north and targeted a military base. After the attack the low-flying fighter jet flew back to a neighbouring country.

If we think about the major adversaries of CAR, the majority of analysts will point fingers towards Chad. But why Chad? The thing is that Chad while being a puppet of Biden is also an adversary or we can say the main adversary of Central African Republic.

In fact, Chad’s mercenaries were recruited by a terrorist group present in CAR called Coalition of Patriots for Change (CPC) which was involved in attacks on the civilians and CAR’s army.

Earlier, Chad’s military also violated the airspace of CAR by having its helicopter fly over the border village of Bang.

The Central African Republic has good relations with Russia. In fact, Russian military instructors are training the military of Central African Republic. The private military company, which is headquartered in Moscow, Wagner Group is also present in the CAR. It provides protection to the President Faustin-Archange Touadéra. Moscow is also involved in several mining projects in the CAR.

However, the US and Europe are also involved in the internal affairs of CAR. In fact, the mandate of the UN Peacekeeping Mission in the country was recently extended for one year.

Read more: Pro-US Chad has been surrounded by pro-Russia nations, and its surrender is inevitable

Now, unlike the CAR, Chad is a puppet of the US and Europe. Its leader Mahamat Idriss Deby, who came to power by taking advantage of the political crisis, established a transitional regime in Chad promising to bring democracy and civilian rule.

The West, which generally condemns coups and dictatorships in Africa, didn’t impose any sanctions on Chad. On the contrary, its puppet financial organisation, IMF, provided financial assistance to Chad.

Similarly, Guinea also witnessed a coup when a military officer, Colonel Mamady Doumbouya, overthrew the former President Alpha Conde. However, the US and Europe immediately imposed sanctions on it citing lack of democracy.

The West is employing this strategy in the backdrop of its diminishing influence in the Central African region which includes nations like Kenya and DRC.

The US’s relations with Rwanda are also not in good shape. In fact Washington threw Paul Kagame under the bus for M23’s atrocities in eastern DRC. West is also worried that William Ruto and Felix Tshisekedi have deployed their militaries in east DRC to destroy their agenda.

The dominance of the US and Europe is waning and their leaders are conspiring not only against CAR but also its neighbour South Sudan. And after taking the aforementioned developments into consideration, a question arises, was the attack, on the military bases of CAR and Russian forces, was taken out on the instructions of the US? Was Chad used as a launch pad by Biden to overthrow the Touadera’s regime and oust Russian troops with it?

There is no certainty regarding these questions, however, one thing is clear and that is ever since the arrival of Russia in Africa, the West is not able to its downfall. Biden and his allies are willing to go to any extent to attain their ulterior objectives.