CAR president is a Russian ally, and Biden has now asked UN “peacekeepers” to topple him 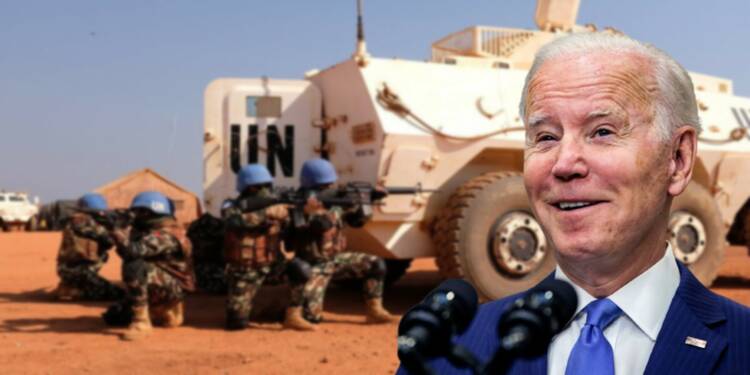 The sinister motives of the US and Europe to get rid of democratic governments in Africa resulted in another arbitrary move by the UN. The country of Central African Republic, in which they are running a nexus with anti-national forces, will have to bear the West for another year. But one superpower has got its back.

The UN Security Council voted to extend its Peacekeeping Mission in the Central African Republic for one year. Three nations abstained from voting on the resolution drafted by France; the countries which abstained are Russia, China and Gabon.

The UN called on CAR president Faustin-Archange Touadera to establish peace and security in the nation. The African nation has been at war with various Jihadist and rebel organizations since 2013. Several territories in the country are also under their control.

The international body asked the government to implement a process for the political solution of the crisis.

The UN peacekeeping mission in the Central African Republic was established in the nation in 2014, it has more than fifteen thousand soldiers deployed in the country. Known as MONUSCO, the role of it is to establish peace and stability in CAR, avert attacks by terror groups on civilians, and help the government in economic development and facilitate peaceful reconciliation of the conflict.

But a question emerges as to why the United Nations is interested in the internal affairs of the Central African Republic? Why has it deployed thousands of troops in the country? Because the CAR has mineral resources like gold, uranium and diamond among others.

Yes, the government has deep ties with Moscow. In fact, CAR has received military instructors from Russia who are training its forces. The Russian private military company Wagner Group also provides security to the President Faustin-Archange Touadera. Russia has also invested in the energy sectors of CAR and provides counsel to the government on political and financial issues.

Therefore, the deployment of the UN’s mission in CAR is to establish the dominance of Biden and his allies on mineral wealth and limit the influence of Russia. The West is not concerned about peace in the country, its real motive is to promote the destabilization efforts and overthrow the pro-Russian government of Touadera and put a puppet leader in his place.

But the people of the Central African Republic have rejected the UN peacekeeping mission due to its outrageous actions. There is widespread anger in the country against MONUSCO. Its troops have been involved in many murders, sexual exploitation and other human rights violations.

In November 2021, a vehicle belonging to the UN tried to cross the perimeter gate of President Touadera’s residence in order to take photographs. As the driver didn’t stop, his guards shot at the vehicle forcing it to flee. While fleeing, it hit and killed a sixteen-year-old girl.

Similarly, in Portugal, police busted a smuggling racket which had connections with UN soldiers in CAR. It was revealed that they stole and transported diamonds and gold from the nation. Despite calls for investigation and prosecution, no action has been taken by the UN against its troops in CAR.

There have been innumerable protests and rallies against it in the country, several of which have turned violent and have led to so-called peacekeepers opening fire on peaceful crowds leading to the death of unarmed protestors.

Now, coming back to the news of extension of the mandate of MONUSCO in CAR, US is determined to exploit the CAR with the help of its “peacekeeping” forces.

But now that Russia is present in CAR and its people are also determined to drive the West out of their land, it looks like Biden’s attempts will eventually fail. The killing of peacekeepers by locals is a strict message that they are not going to simply watch their homeland turning into a hub of lawlessness and anarchy.

Just as the West suffered a defeat in Ethiopia and Mali, its fate in CAR will be the same. It will soon realize that it needs to withdraw MONUSCO from CAR and focus on nation-building rather than sending terrorists to African countries.