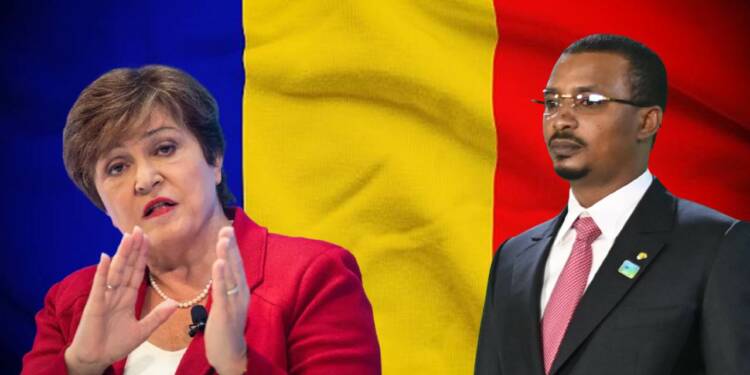 Enlightened souls always said, having double standards and lack of ethics are the first signs of decay and the west is charging towards its own decay.

The International Monetary Fund announced that it will restructure the debts of Chad by the end of the year. The IMF has confirmed that it will take care of the economic blunders of Chad which has pushed the African country into mounting debt, inflation and poverty. The body is going to issue a bailout to Chad so that it is able to restore the economic and financial stability. Chad whose economy is sinking is desperate to receive any help it can get.

Now, why is the International Monetary Fund extending such financial assistance to an African country? What does it hope to gain from helping Chad? There are other nations in Africa whose economic situation is not good, why is the IMF not helping them as well? Is there any vested interest behind this debt restructuring initiative?

There are countries like Guinea, Mali, Ethiopia, Democratic Republic of the Congo etc which are also witnessing financial problems. In Ethiopia, the attacks by Tigray People’s Liberation Front on federal government forces and civilians have created a political, economic and humanitarian crisis with poverty, famine, food insecurity etc troubling the nation. But, the IMF never offered any help to Abiy Ahmed and his people who are the victims of TPLF’s aggression.

Similarly, the government of Democratic Republic of the Congo is embroiled in a conflict with the M23 rebel group which is actively involved in stealing its resources like gold, cobalt etc, and hurting its economy. Yet, the IMF never stepped forward to help DRC or extended any loan.

Chad is not a democratic country; its political situation is unstable. Mahamat Idriss Dbey, the current leader of Chad took the position as the president of Chad following the death of his father who died while fighting the rebels. Deby, who is a 37 year old four-star military general, established a transitional government in Chad which will bring democracy and restore civilian rule. However, while announcing himself as the head of the government in Chad, Deby scrapped the constitution, dissolved the parliament and suspended elections. The UN which normally responds in such a situation of political crisis remained silent and didn’t impose any sanctions on Chad. It chose to turn a blind eye.

Deby pledged that the transition period to democracy and civilian rule will only last for eighteen months and announced that he will not run in the presidential elections. However, Deby broke his promises as the national forum of Chad extended the transition period of his government and made him eligible to stand in the next elections.

Now, any rational person would think that the UN would do something about this. It will impose sanctions, condemn the actions of Deby or suspend international aid. But, the UN has done nothing. The US and EU, which are quick to give their opinions on the internal matters of any country, have not said a word against Chad. On the contrary, the West dominated IMF has announced a big financial help to Chad. The US did a favour to Chad instead of putting sanctions on it. Generally, the West responds with criticism whenever there are regime changes or coups in African and Asian countries.

Just like Chad, Guinea too witnessed a similar political crisis. Its leader Colonel Mamady Doumbouya led a military coup to oust the former president Alpha Conde who was facing massive public outcry due to his authoritarian rule and corruption. After taking the position as head of the government in Guinea, Doumbouya too announced that a transition to democracy will take place and asked for some time. But the West instead of understanding his problem, immediately imposed sanctions on Guinea through its puppet ECOWAS. These sanctions are having dire consequences on Guinea’s economy and are hurting its people.

Also Read: IMF, UN and now FATF: The tools that West uses to keep Africa under its thumb

Reasons why IMF is helping Chad but not Guinea

Why did the West treat Chad differently than Guinea? Why does Chad deserve financial assistance but Guinea sanctions? The reason is Chad is loyal to the West. It voted in favour of Ukraine during the UN resolution which condemned Russia and is rich in resources like gold, oil, gas, limestone, uranium and bauxite. Therefore, the US and EU embraced it and now the IMF has come to its rescue.

On the other hand Guinea has good economic, strategic and diplomatic relations with Russia. It has gold, bauxite, diamond etc. It rejected West’s demands; hence the US is taking its revenge from it.

Biden and his allies will do everything they can to not upset Chad even if it has the most draconian leader. The West is adamant about their bid to gain control over Africa’s rich resources that it can go to any length.