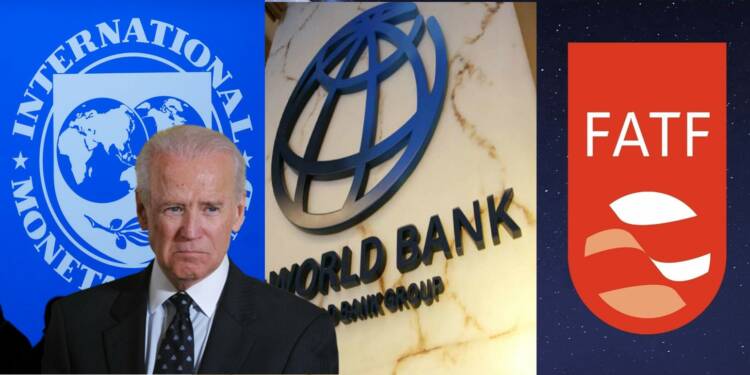 The US has always portrayed itself as the messiah of the world, where there is a problem USA has a solution. This is nothing but propaganda because the USA wants to meddle into everything and everywhere. To sustain its hegemony over the world, USA has created institutions such as IMF, World Bank and UN with its allies in the west which together dominate these institutions in the name of holistic approach. These institutions are used by them in order to meddle into each and every situation in the world. Until recently it was going perfect for  USA. But it was not happy with the growth pace of its influence so it devised strategies to meddle into the peaceful parts of the world by destabilizing them with conflicts, violence and anarchy.

To create such instabilities US creates terror groups, rebels and even uses radical Islamists such as:-

These are some of the prominent instances where the USA has first created a problem and then intervened to stabilize the areas. These rebels are either created by the West or are sustained by it for accomplishing goals which the USA cannot officially complete. This proves to be a major strategy of the US to meddle and intervene in some areas where it was previously not able to.

For instance, the UN Peacekeeping mission named MONUSCO is present in the Central African Republic [CAR] but instead of peace it contributes to the anarchy of the country.

In addition to its neglect for the security situation, the UN mission in CAR is also under scrutiny from the people for the atrocities and brutality committed by its personnel. Over time, UN peacekeeping personnel have committed atrocities that have infuriated the locals and triggered calls for both inquiries and criminal prosecution

Apart from UN Peacekeeping forces USA also intervenes directly in such destabilized countries in the name of controlling the situation, for instance the US’ invasion of Iraq, Afghanistan, Vietnam and many more. In Africa the USA operates Baledogle Airfield, also known as Wanlaweyn strip which is its military base in Somalia. It uses this base for maintaining its foothold in the Horn of Africa region which is also adjacent to a choke point of Bab El Mandeb strait which opens into the Red sea. According to data, this base is currently used by multi-national forces including United States.  It uses this base to operate drones and conduct drone strikes on Al-Shabab insurgents.

USA is also desperate to control the Red Sea and to accomplish this it is fueling the Tigray crisis to gain control over Ethiopia and Eritrea and ultimately Horn of Africa.

Also Read: CAR citizens are baying for the West’s blood as they give UN peacekeepers a run for their lives

It has deployed its beautifully devised puppets known as institutions regarding economic affairs of the world, the prominent ones being World Bank and IMF. These two institutions come in handy when the US wants to launch an economic offensive on a rival or when America wants to control a small country through loans or other types of preconditioned aid.

For instance, a few weeks ago the IMF penned a report suggesting various African nations to slow down on their economic reforms. In its report it stated, “Addressing the lack of resilience to climate change and the resulting chronic food insecurity will require careful prioritization of policies, given financial and capacity constraints,…” (Sic)

IMF suggested that African Nations should not reform its sectors by stating “governments in sub-Saharan Africa to be cautious about macroeconomic reforms.” (Sic)

In another shameful example IMF has imposed austerity measures on poor Africans. A UNICEF report on nutrition comparison between the West and Central Africa noted that almost 6.3 million children suffer from starvation due to wastage of food. The British nonprofit organization Oxfam was compelled by this study to assess the ongoing humanitarian catastrophe in Africa.

The thoroughness of Oxfam’s research exposed the significant wrongdoing engineered by a group that the world trusts upon. According to the report, the IMF loan schemes put in place following the lockdown in Africa are pushing a significant number of developing countries towards crises.

Condescending behavior and a haughty sense of entitlement of the IMF allowed them to confine the underdeveloped nations of Africa since ages.

The World Bank is also not behind in executing these charm offenses of the West. A few weeks ago the World Bank approved a $750 million credit line to Nigeria which is meant to control the elections of 2023 in Nigeria. Nigeria received assistance from the US for combating terrorism, according to US Secretary Blinken. In essence, he was advocating that the USA expand its presence in Nigeria in order to combat terrorism. And the US’ assistance in holding free and fair elections won’t contribute to free elections; instead, it would give the US control over Nigeria’s election process, which it will eventually manipulate for the sake of its regional interests by installing a puppet government.

America also uses its different multilateral organizations to control the narrative and resultantly influencing major critical decisions around the world. The TPLF in the Tigray region had come to the negotiation table for peace talks with Ethiopian Government. Peace was in arms reach for the Horn of Africa region.

But, the so-called investigators have discovered “reasonable grounds to believe” that parties to the conflict have committed war crimes during the continuing Tigray crisis, a UN vote was held on sending a U.N.-mandated monitoring team there.

With 21 Ayes, 19 Noes, and 7 Abstentions, the resolution proposed by the Czech Republic on behalf of the European Union narrowly passed in the council.

The most crucial point to take out from this is that all of the African countries who are currently a part of the U.N. Human Rights Council opposed the resolution because they could see through the clandestine intentions of the west.

Even those African countries that typically support the West rejected the resolution. This was primarily done to disrupt the ongoing peace talks to maintain US’ influence over the Horn of Africa.

United States also controls punishing organizations such as the terror-financing watchdog FATF. It is used against countries which deny US’ influence and decisions. Recently the watchdog was unleashed on Germany for its dissent regarding the Ukraine-Russia conflict. The FATF is also currently hounding the DRC which is a major cobalt producer and is infested with the West backed M23 rebels. These rebels facilitate smuggling of cobalt and other minerals present in DRC to the neighboring Rwanda. There is a UN report on record which clearly states that these M23 rebels are supported by Rwanda, who in turn is a US ally. The DRC is dealing with M23 rebels in a harsh way which is compelling them to run back into Rwanda and other neighboring nations. This has rattled the US and in order to restart its illicit activities in DRC and stop its crackdown on, US’ proxy M23, it has accused DRC of terror financing and money laundering.

On this basis FATF has put DRC in its “grey list”. Finance Minister Nicolas Kazadi stated on Friday that Congo was “under enhanced surveillance” by the Financial Action Task Force.

The irony is that currently there are 23 countries on this list including nations like Mali, Uganda, Burkina Faso, Senegal and Morocco. Incidentally all these named ones refuse to dance to the whims and fancies of the USA.

The ultimate goal of the west is to keep Africa entangled in its problems and create new problems for the continent in order to keep it underdeveloped. A sub servient Africa is far more beneficial as compared to a self-sufficient one. The West in the garb of problem solving will only keep plundering like it is currently doing in Nigeria of oil and DRC of minerals. In order to solve these problem African nations need to emulate the example of Mali for kicking out the West. For development and investment all African nations should invite countries with no ulterior motives such as Japan, India and Russia. These 3 nations are a package if taken in together. Japan will bring technology and discipline. India will bring its expertise in utilizing manpower and manufacturing. Russia will bring in security and expertise in defense manufacturing. All in all Africa needs these qualities to develop and it should embrace Japan, India and Russia while kicking out the West.