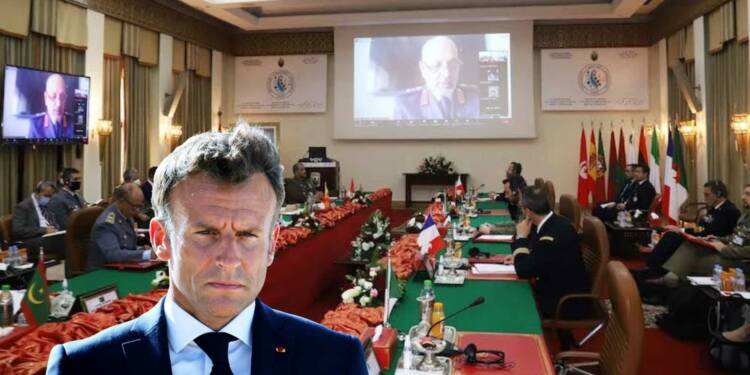 5+5 defense initiative: Emmanuel Macron ran as the change candidate in the French presidential election. He appeared to view France’s colonial history from a fresh viewpoint and be in favour of creative solutions because he was independent and unconstrained by conventional party politics. His voice surprised the people and was unmistakably contemporary.

The French presidential candidate even said something that no president of France, let alone one on the left, had ever dared to say: he called the French colonisation of Algeria a crime against humanity.

Years later, the same Macron, in his current role of President of France, has made incredibly condescending statements questioning Algeria’s pre-colonial identity as a nation and is moving fast to initiate policies in an attempt to intimidate the African nation.

How did Macron’s stunning turnabout occur? How could a guy who once held such radical domestic and international political-economic beliefs use rhetoric to cast doubt on the idea that a pre-colonial Algerian nation even existed, let alone collaborating closely with its bitter foe, Morocco?

Can it be attributed to a simple mistake or a new revision of history intended to change how people view French-Algerian relations and be considered as a part of the larger French ambition for the Maghreb region? Could it just be a case of the French president being arrogant or complacent?

Only time and Macron’s future biographers will be able to answer that. But one thing is certain: the French policy’s failure in Libya and Mali, as well as its handling of relations with Algeria, a significant military force in the area, show a wider European lapse of imagination and an absence of strategic understanding about Africa.

Macron of today appears to have lost his way. In an effort to preserve French privileges that are obviously unsustainable over the long run, the one French president who first demonstrated a readiness to confront France’s hegemonic policies is now trying to straighten up the diplomatic muck.

Recently, during their 18th meeting, the defense ministers of member countries of the “5+5 defense initiative” with the participation of France, Italy, Portugal, Spain, Malta, Morocco, Mauritania, Libya and Tunisia, have agreed in Rabat to enhance further their cooperation in maritime surveillance, aviation security, risk management, military training and interoperability.

In a joint declaration issued following their Rabat meeting, the Heads of Delegations paid tribute to the results achieved under the rotating Moroccan presidency of the 5+5 defense initiative. A special praise was assigned for the role played by Morocco, under the leadership of King Mohammed VI, for the stability and peace of the western Mediterranean region.

The 5+5 Dialogue is a sub-regional forum for dialogue between ten Western Mediterranean countries and it promotes cooperation in science, technology and higher education.

The Maghreb countries involved are Algeria, Libya, Mauritania, Morocco and Tunisia, and the European nations are France, Italy, Malta, Portugal and Spain.

France has been a major player in this architecture and therefore any lens that examines the increasing significance of Morocco in the gang of 10 should not be divorced from Paris. A few days ago, France and Morocco even announced on the re-establishment of full diplomatic relations following months of tensions over visas.

You see, in order to maintain its waning sway in the Maghreb, France has been attempting to work more closely with Rabat.

France’s economic and military might are now diminished, and it lacks the tools necessary to influence African policy. In economic terms, France cannot compete with China. Not only do Chinese investments in Africa dwarf those of France, but they also exceed the investments of all western countries combined. French exports to Africa represent barely a quarter of those of the Chinese, despite China’s relatively recent arrival on the continent.

From the military standpoint, France has reached the limits of its intervention in the Sahel, with operations Serval and Barkhane failing to eliminate the armed Islamist groups proliferating in the region.

In the event of a withdrawal of French troops, Russia is ready to step in. Collaboration is already underway between Mali and the controversial Russian mercenary organisation, the Wagner Group.

Also Read: A France -Russia war is about to begin in Central Africa

Besides, Algiers and Moscow have seen a level of amity that has never before been seen, with the former purchasing military equipment from Moscow. As a result, Russia, an established friend of Algeria, is prepared to seize control of the abandoned Sahel region.

Algeria was consequently the target of Macron’s displeasure as he attempted to reconsider his policy-making. The French government decided to significantly reduce the number of visas provided to Algerian politicians. The growing divide between France and Algeria should also be seen as an extension of Paris’ revised regional strategy. However, France is trying to balance its position with Algeria too, by employing some cosmetic policy changes towards Algeria.

French algorithms now more than ever need to be updated for the twenty-first century. In an era when long-standing alliances and post-colonial zones of interest have given way to transactional diplomacy, formulating a cogent strategy for northwest Africa is no simple task. France has fewer cards than it had in 2011, and it cannot wish away Russia’s expanding importance.

By attempting to completely affiliate Morocco with France and repudiate the once-friend-now-foe Algeria, the French President has placed all his eggs in one basket. If Macron will thrive from this approach remains to be seen. Be that as it may, the battle for the hearts and minds of Maghrebis and Africans might prove more complicated than Macron has so far seemed to think.