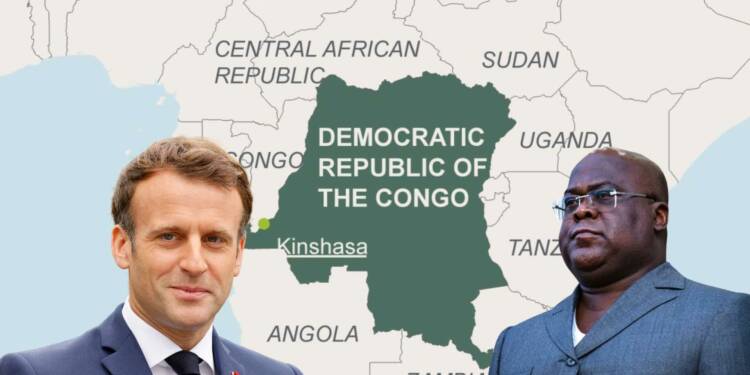 Reputation, it is all about image when it comes to geopolitics. Policymakers pour billions of dollars in creating a perception about their country. For instance, USA is seen as the saviour of democracy all over the world but in reality, the case is completely opposite. Similarly, France is also trying to clean its tarnished image in the continent of Africa to secure its economic interests.

Recently a resolution was passed in the UNSC which adjusted the arms embargo on Democratic Republic of Congo (DRC).

It was France that presented Resolution 2667, which was voted for unanimously, and which adjusted the arms embargo on DRC, removing the need for the armed forces of the Congo, FARDC to first ask for permission from the sanctions committee of the UN Security Council.

Interestingly, France presented the resolution just a day after condemning Rwanda’s support for the M23 rebels.

It’s important to mention, that DRC representatives pleaded for the lifting of this ban earlier, on several occasions.

For years, DRC was required by the Council to first notify the sanctions committee the list of weapons it intended to buy, eliminating an element of surprise for armed groups who were usually armed better than the national forces. Thus, this ban has been, for long, helping the armed groups although the reason stated for this ban on DRC was that allowing it a free hand to buy weapons was fuelling the conflict as some of the arms bought allegedly ended up in the hands of several armed groups in the eastern parts of the country.

However, why did suddenly France decide to present this resolution that lifted the ban on DRC, which was in place for so long?

France wants to secure its interests

France recently condemned Rwanda for its support for M23 rebels in the DRC.

Not just France but a growing number of countries including Germany, Belgium have also now started to openly accuse Rwanda for supporting M23.

To put it simply, the DRC is rich in minerals which is extremely important for world’s technological advancement and the West now needs to secure these minerals.

For France, the stakes are huge in the Sub-Saharan Africa and it can’t let go of its influence in the region that easily.

François Mitterrand, a former French President (1981-1995), had prophesised in 1957 that without Africa, France will have no history in the twenty first century.

Historically speaking, in the realm of economy the African currency, CFA Franc, was linked to the French Franc. The CFA Franc facilitated the operations of French multinationals such as transportation/construction company like Bolloré, the giant Franco-Belgian oil firm Total, a telecom related firm Orange as well as nuclear energy related public firms like Compagnie Générale des Matière Nucléaires (COGEMA). Over 1100 French business groups with their 2109 subsidiaries were active in Africa in 2019.

Further, France obtained some key strategic minerals like Uranium (100%), bauxite (90%), manganese (76%), Cobalt (59%) from different African countries. France’s energy security depended on the presence of its oil firms like Total in the Gulf of Guinea.

Moreover, now the French giant, Total Energies, intends to drill up to ten exploration wells for oil and gas in the deepwater Orange Basin, located in Southern Africa, along the west coast, as well as conduct sonar surveys and vertical seismic profiling, among other operations.

Further, French company Total is also involved in the mega project EACOP. The East African Crude Oil Pipeline Project (EACOP) is a pipeline that will transport oil produced from Uganda’s Lake Albert oilfields to the port of Tanga in Tanzania where the oil will then be sold onwards to world markets.

The project aims to utilize the huge crude oil reserves at Lake Albert, a 160-kilometre natural border between Uganda and the Democratic Republic of Congo.

Thus, the security situation and insurgency in the region doesn’t bode well for so many French projects going on in Sub-Saharan Africa. Further, with diminishing image & credibility of France in the region, it can’t risk losing anymore of its sphere of influence, especially when a new set of countries such as China, India, South Korea, Japan and Turkey are also making inroads in the continent.

France pampering DRC is only an attempt to secure its own huge stakes and interests in the region. Let’s not forget that France has faced a series of humiliation recently when it had to end its military interventions in multiple countries. Now, it is doing everything it can to somehow be relevant in the region and atleast safeguard its economic interests after losing on the military front.

Canada, China, India and more: Justin Trudeau should get the inaugural “Trudeau Awards for Hypocrisy”