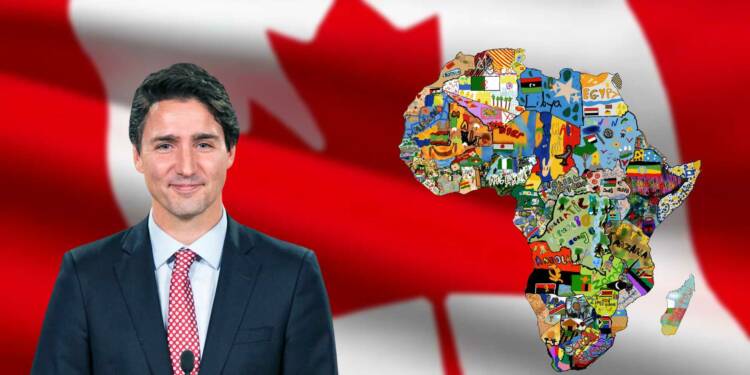 The African continent is enormously filled with resources, but none of these gifts of mother earth have been used by Africans for themselves. Because Western powers such as the United States and the European Union have complete control over most natural resources.

On the other hand, governments are swayed by money and aid from China, USA and other western puppets. Russia is the military master here. In the midst of this chaos, one person is having daydreams to enslave the global south.

Justin Trudeau, our own Queen plans to enter Africa but with wrong planning and execution.

According to a media report by CBC, Justin Trudeau, Prime Minister of Canada, is proposing a move away from humanitarian help and toward subsidizing infrastructure projects in underdeveloped countries.

Last week while giving an interview with the Canadian Press, PM Trudeau stressed, “A lot of it is less around humanitarian development, in my conversations with the Global South, and much more about, well, how can you create investments in renewable energies that’s going to last the next 20 years?”

He furthermore added, “These conversations are shifting, but we’re going to continue to very much be present in investments in the Global South.”

If this happens, Trudeau is going to make a remarkable shift in policymaking. Since 2015, Liberals have held that promise since taking office that Canada will increase international development assistance every year.”

As a part of it, the Liberals had earmarked an annual $6.6 billion in aid before the COVID-19 pandemic. They boosted that target beyond $8 billion, largely for programs related to fighting the impacts of COVID-19, and then this year also to aid Ukraine.

Now, the liberals are looking to make a significant shift and approach the global south, with Africa being the most vulnerable region and where Trudeau is most likely to try his luck.

At the very same time, Trudeau also started his brief visit to Africa via Tunisia as part of what his foreign affairs minister, Melanie Joly described as ‘a fight for power on the continent between democratic and authoritarian states’.

“The reality is that there is a battle of influence taking place around the world, and one of the battlefields is definitely Africa,” These were the crisp words of Melanie Joly for glorifying Trudeau’s visit.

Well, the Canadian PM and in reality, every government across the globe knows that luring African populace is easy. Only the African governments understand the real motive behind the so-called ‘subsidization of infrastructure projects, whereas, the people behave like sheep in a herd, and easily embrace even a few bucks.

The Liberals are keen to change their policy because they feel that if they want to be internationally and geopolitically sound, Africa can do the job.

But, is that so easy? Absolutely not.

Africa today is a hotbed of activity where players like the US, China, and Russia are leaving no stone unturned to win the heart and minds of both the government and the people. In such chaos, Trudeau is having a dream to enter Africa.

Also, it would be naive of Trudeau administration to challenge China here via investments because we all know, that Trudeau lacks the courage to take up the cudgels against the masters of Beijing. Whereas, he is undoubtedly not capable of challenging US and Russia, all by himself.

Therefore, one of the two things could occur. Either master Xi and his apprentice Trudeau will collaborate in Africa to challenge Russia and the United States. Or Trudeau will get thwacked at by all three at once. Entering Africa based on superficial pre-conceived notions without appropriate planning is a blunder that Trudeau appears poised to commit. He’ll ridicule the Canadians on a world stage once more if that happens.