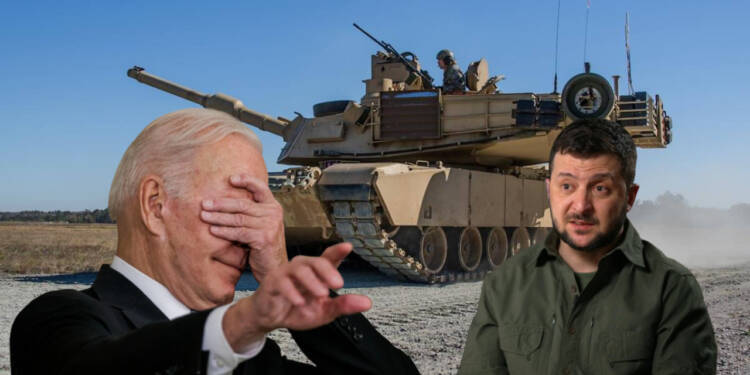 Ukraine keeps asking for more monetary and military aid from US and West. However, its constant bickering is becoming a matter of irritation for its Western masters. This time US has ridiculed Ukraine’s weapons request by saying that Ukraine soldiers don’t know how to use the weaponry.

In order to aid Ukraine in its conflict with Russia, the US will not provide it with M1 Abrams main combat tanks, according to a Wednesday night article in the Washington Post that was based on statements from US defence officials.

The Abrams were on Mikhail Podoliak’s “Christmas wishlist,” which he posted on Twitter earlier this month. Podoliak is a top adviser to the Ukrainian president. In his Wednesday address to the US Congress, President Vladimir Zelensky reiterated the request and said that Ukrainian forces were “capable of operating American tanks and aircraft.”

According to authorities cited by the Post, the Abrams are “too difficult to maintain and complex to operate,” for Ukraine. Authorities also claimed that “Ukraine has enough tanks already.”

The incident shows how US is increasingly getting reluctant to send its weapons to Ukraine. Ukrainian army’s inefficiency to use Western weapons has been highlighted earlier too.

Germany’s armed forces Bundeswehr blamed Ukraine for using the self-propelled howitzers it had sent in an inefficient way despite being trained in Germany. Bundeswehr said that the loading mechanism of the howitzer is being put under a great deal of stress as a result of the high rate of fire with which the Ukrainian armed forces fire their weapons in their defence against Russia.

Also Read: Germany sent antique pieces in the name of arms to Ukraine

Bundeswehr considers 100 shells a day to be a high-intensity mission, but the Ukrainians apparently fired far more shells. Germany also blamed Ukraine forces for firing ammunition for far more distance than its original purpose. The ammunition is designed for particularly precise effective hits.

However, US has agreed to provide MIM-104 Patriot air defense missile systems to Ukraine. But, on condition that it’ll train Ukrainian soldiers how to use missile systems on its own soil for the first time since the conflict began.

According to Politico sources, the training of Ukrainians in how to use the system may potentially take place on US soil, at least in part, contrary to what the White House claimed last week. It said that the weapons can be operated with dozens of trained individuals. Normally, it takes months to finish the course. With war in the crucial stage, every day is important and the missile systems may reach Ukraine after the war is over.

The US and its allies send military hardware of the NATO standard into Ukraine to combat Russia, and the EU has its own programme to teach Ukrainians how to use it. Poland hosts majority of the classes; however, some also take place in Germany. The US, UK, Canada, Sweden, and the Netherlands are just a few of the nations that have their own military training programmes specifically for Ukraine.

The episode highlights how despite the training Ukrainians, Western countries don’t feel ease in sending weapons to Ukraine. Their weapons in Ukraine regularly become fodder for Russian army. It is indeed true, that in the end it is the man behind the machine that drives the war, and Ukraine has proved its incapacity to operate such  weaponry.

This is why you see Scholz expresses disenchantment with Ukraine over the latest diplomatic tiff. Zelensky’s shenanigans could thus end up making Germany anti-Ukraine.