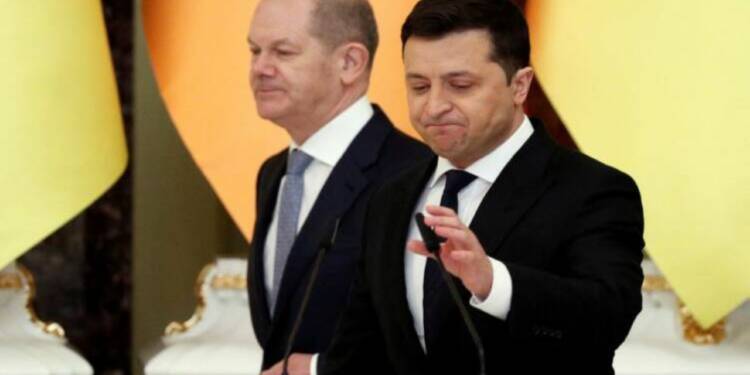 Ukraine has relied on the vital military, economic and humanitarian supplies from US and European countries amidst its war with Russia. Several countries have come forward to supply important arms and ammunition to the European country.

However, the help that it has got from Western weapons is questionable as it has failed to defend itself from Russian aggression and has lost 20% of its territory to Russia including the Donbas region.

A recent report by Der Spiegel has exposed the hidden truth behind Berlin’s weapon supplies to Ukraine. According to the German magazine, the self-propelled howitzers are already displaying signs of wear and tear one month after German artillery weapons were sent to Ukraine.

Kyiv recently notified Berlin’s Ministry of Defense that three of the seven Panzerhaubitze 2000 guns it had received at the end of June, were showing error messages. Therefore, repairs are required for several howitzers.

Germany is also facing challenges with the resupplying of ammunition for the Gepard anti-aircraft tank, the first five of which were just supplied to Ukraine. The firing mechanism of tanks does not identify the ammunition from a Norwegian producer. Thus, the bullets need to be upgraded, it was discovered during the test shooting in Germany. In August, more tests of the improved ammunition will be conducted.

Due to the Bundeswehr’s discontinuation of the Gepard system, Germany was only able to provide Ukraine with just 60,000 rounds of ammunition. Ammunition stocks in other countries could not be purchased because they are made in Switzerland. The government of those countries have rejected arms exports to Ukraine.

Germany’s armed forces Bundeswehr have rather blamed Ukraine for using the weapons in an inefficient way despite being trained in Germany. The loading mechanism of the howitzer is being put under a great deal of stress as a result of the high rate of fire with which the Ukrainian armed forces fire their weapons in their defence against Russia. Bundeswehr considers 100 shells a day to be a high-intensity mission, but the Ukrainians apparently fired far more shells.

In addition, Germany has blamed Ukraine forces for firing ammunition for far more distance than its original purpose. The ammunition is designed for particularly precise effective hits. The failure of Ukrainian forces was also highlighted when Russia targeted Western tanks which were parked in the open in Kyiv airstrikes.

Read our Premium piece: All European countries refuse to bail out the German economy

At the beginning of July too, Germany lashed out at European Union about the Lithuanian blockade which could put its 1000 soldiers’ life at risk who are stationed in the country.

You see, Germany is behaving wise enough to keep from falling for Ukraine’s war trap. As Germany’s domestic woes keep on rising, Berlin has come to terms with the reality that prolonging the war in Ukraine won’t help. Its stern stance has led to Russia cutting its gas supplies from Nord Stream 1 to 20% of its original capacity. This has left Berlin with no option but to activate the Nord Stream 2 and ward off domestic issues and a recession. All in all, Germany has come to the realisation that aiding Ukraine would only antagonise Putin and this would not be favourable for Germany domestically.