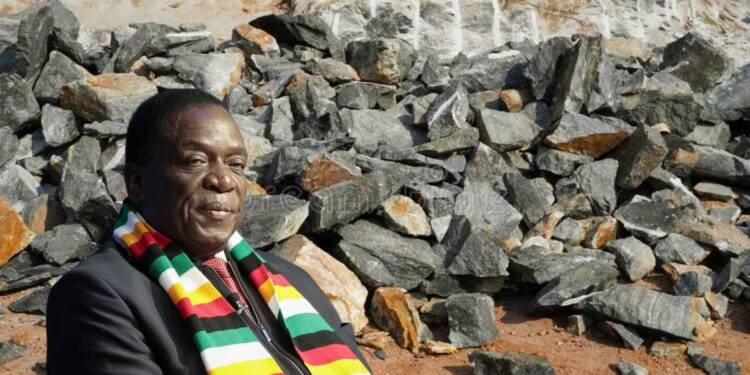 Zimbabwe has the largest lithium deposits in Africa. The Bikita mine, located 308 kms south of the capital Harare has the country’s largest lithium mine with reserves of 10.8 million tons of lithium ore. In the modern world, lithium plays a critical role in our daily lives.

Zimbabwe, a country whose economy is reeling under the Western sanctions can gain big from its vast reserves of lithium. Now, it has finally decided to take steps in that direction that is bound to annoy the West.

Lithium’s demand is expected to rise from 500,000 tonnes of lithium carbonate equivalent (LCE) in 2021 to somewhere between three million and four million tonnes in 2030. Lithium is the driving force behind  the EV industry. Apart from EVs, lithium is an essential part of the technology that powers mobile phones, computers, power tools and battery storage of energy generated from wind and solar power.

Zimbabwe has recently imposed a ban on the export of unprocessed lithium. The decision has been taken to stop artisanal miners. These miners dig up and take the mineral across borders to sell.

Now as per the regulation, “no lithium bearing ores, or unbeneficiated lithium whatsoever, shall be exported from Zimbabwe to another country.” (sic)

However, the ban doesn’t apply to the export of lithium concentrates.

Zimbabwe’s hitting the West where it hurts

Read More: Zimbabwe is one step closer to launch Africa’s own ‘green revolution’

It is well known how the West has turned to Africa to secure their energy needs after the Russia-Ukraine war. The West wants to switch to clean energy and it is not possible without Africa. Resource-rich Africa can play an important role in supplying clean energy materials.

The US will need far more lithium to achieve its clean energy goals. Lithium is critical to development of rechargeable lithium-ion batteries that are seen as key to reducing climate-changing carbon emissions created by cars and other forms of transportation.

Worldwide demand for lithium was about 350,000 tons in 2020, but industry estimates project demand will be up to six times greater by 2030. As there’s a huge spike in demand, Zimbabwe has the potential to meet 20% of global lithium demand.

However, gone are the days when Africa exported raw materials & imported finished goods which denies the continent to gain any substantial economic benefits which can actually contribute to its growth. Now Africa has become more assertive and self-confident and is taking measures to secure its own national interests.

Zimbabwe banning export of raw lithium is another instance. With this Zimbabwe is sending a message to the West for manufacturing batteries in the continent itself. It has now realized that it can cash on the potential of Africa instead of just selling the ore to the West’s crony capitalist companies.

The Deputy mining minister of the country said, “We want to see lithium batteries being developed in the country. We have done this in good faith for the growth of industry,” as reported by Quartz.

Moreover, the Zimbabwean government has also claimed that it lost $1.8 billion in mineral revenues due to smuggling and externalization to South Africa and the UAE.

This is an important step taken by the country as it struggles with dire economic situation since the last two decades due to US sanctions. The African nation lost $12 billion through illegal trade involving multinational companies from richer nations. For a better perspective, these funds were more than enough to clear Harare’s foreign debt of $13.7 billion. It is known how Western companies have been involved in corruption and have exploited Africa’s lithium mines. Zimbabwe holds the biggest lithium reserves in Africa and the fifth biggest in the world. This export ban is designed to change the incentives for processing firms to relocate or add value to the source market so that resource-rich nations can make more of the value-added, for example, the manufacturing of electric batteries. This will also create jobs for local indigenous Zimbabweans which will help its ailing economy in a significant way.

In conclusion it can be said that Zimbabwe has shown the way how Africa now can take decisions for securing its national interests by not letting the West to exploit its vast natural resources. The country is aiming big despite crippling US sanctions and now it has had enough and decided to pay the West back in the same coin.