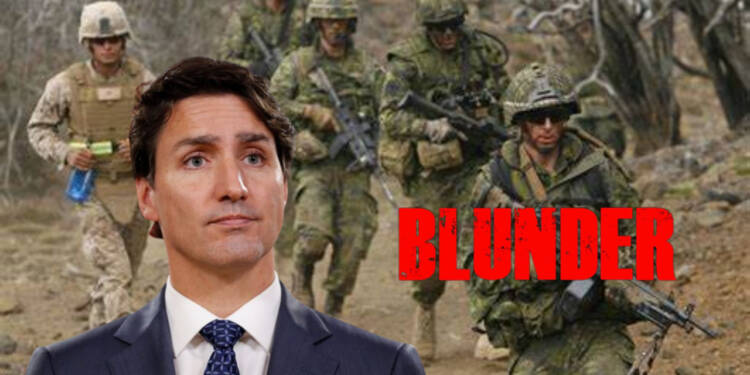 Canadian national security: The Canadian military is suffering from severe shortages of practically everything, as well as one of the greatest staffing issues in its history. The Canadian Armed Forces is warning of a significant shortage of recruits to fill thousands of open jobs, with the deficit so acute that top officers have declared a crisis.

Instead of emphasising administrative abilities and logical calculations, the Trudeau government has begun to take bizarre tactics in response to the crisis, which may jeopardise Canadian national security.

Permanent residents can now apply to join the Canadian Armed Forces, regardless of whether they have been trained by a foreign military.

It’s the latest effort by Canada’s military to boost recruitment numbers, which are lagging well behind the target of adding 5,900 new members by March.

Officials have blamed a series of factors, including the COVID-19 pandemic and reputational issues stemming from a number of high-profile sexual misconduct cases, for the current shortfall of nearly 8,000 soldiers, sailors and aviators.

Until now, permanent residents in Canada could sign up only if they were skilled professionals who were trained by foreign militaries, but the federal government is now broadening the pool of applicants.

The change comes as Canada has released the Immigration Levels Plan for 2023-2025. The plan is targeting 500,000 new permanent residents in Canada per year by the end of 2025. This may drastically widen the pool of candidates the military has to choose from

Let me mince no words and say this as directly as I can: This has to be one of the worst policy decisions. To begin with, the Canadian immigration system is a disgrace. There has been a plethora of documentary evidence demonstrating how individuals got citizenship fraudulently or falsified information required for permanent residency. A normal Canadian should tremble at the thought of these fraudsters being part of the Canadian military apparatus.

Furthermore, one of the primary motivators for immigration is a desire for socioeconomic mobility. Joining the military can assist permanent residents acquire citizenship, in part because immigration officials prioritize their applications. Perhaps a significant inducement for immigrants to join the Canadian military is the desire to obtain citizenship and so live a better life than they do in their home countries. In sum, hedonistic impulses would be a causal factor for these immigrants to join the military. Are the Canadian authorities really blind to this? A strong military is made up of zealously nationalistic people who do not flinch at the prospect of giving their lives for the motherland. Monetary benefits should never be an incentive for the armed forces.

To be honest, it is not the immigrants’ fault. If not for selfish reasons, why would a person leave his birthplace and relocate to an entirely different location? If anything, it is Prime Minister Justin Trudeau who is willing to jeopardize Canadian national security in order to avoid criticism and dishonor.

Not to mention that this latest legislation can create a wonderful arena for rival countries like China to conduct espionage. And history demonstrates how Canada has been the victim of Chinese spies working against Canadian national interests.

The defense of a nation is the most important task that must be completed with the utmost precision. However, this does not appear to be the case in Trudeau’s Canada.

The unsuspecting Canadian people have imperiled the ideal of nationalism, which has manifestly been taken over by ‘wokeism’.

Extreme wokeness appears to have paralyzed a significant segment of Canadian society. While adjusting to a more enlightened lifestyle, these young Canadians have adopted various other values while rejecting nationalism and patriotism.

The Liberal Party’s unflinching support for the woke agenda is progressively killing the spirit of nationalism and a sense of devotion to one’s homeland.

Nationalism, you see, corresponds with traits that are expected to improve combat effectiveness and morale, such as perceived combat readiness, willingness to remain in military duty, and more favorable evaluations of unit leaders. By neglecting these fundamentals and allowing anybody and everyone to join the military without rigorous screening, Trudeau is putting his country in grave danger.

After jolting the west with de-dollarisation and space tech, Zimbabwe takes another bold step