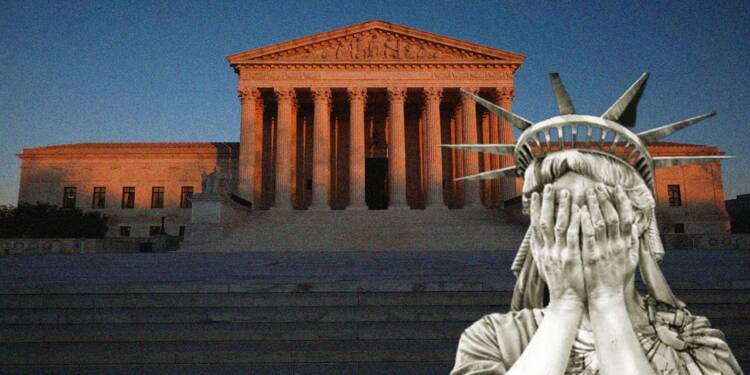 Judiciary is an important pillar of democracy and it is supposed to uphold the sanctity of constitutionalism. A strong judicial system can ensure justice and equality throughout the nation. But what if I tell you that it is not the case in United States of America, the “ contemporary world’s oldest democracy”? Yes, that’s right. US Supreme Court faces a grave legitimacy crisis.

Samuel Alito and Elena Kagan are two justices who have publicly sneered at each other this year on whether the legitimacy of the court is at risk or not. Political interference in the selection of US Supreme Court justices is one of the primary causes of the crisis in legitimacy.

There are various improvements to take into account, but term limitations for the justices seem to be a foremost one. Members of its highest court in the oldest democracy are appointed for life is the United States. Few states, in fact, give their judges and justices too this kind of assurance.

Take an example of Clarence Thomas, the associate justice of the US Supreme Court. When Clarence Thomas was confirmed in 1991, he was 43 years old. He will have served as a justice for 47 years if he stays on the bench until he becomes 90, which is the age at which Justice John Paul Stevens retired. This gives one individual much too much power for too long.

Compared to 1787, the year the Constitution was written, the average lifespan today is far higher. Justices of the US Supreme Court lasted 15 years on average from 1787 to 1970; since 1970, they have lasted at an average for 27 years.

Let’s look at another justice: Amy Coney Barrett, when Barrett was confirmed in 2020, she was 48 years old. She will serve as a justice until 2059 if she stays on the bench until she is 87, which is the age Ruth Bader Ginsburg was when she passed away.

Further, a majority of Americans support the changes. 66 percent prefer term limits for justices while 45 percent support packing, or extending, the Court.

The fact that prominent rulings were tarnished by serious ethical errors also hurts the Court’s credibility. A case involving the disclosure of White House communications regarding the uprising on January 6 was determined by the Supreme Court in January. The public learned months later that Justice Clarence Thomas’ lone dissent in that decision involves text conversations from his wife, Ginni Thomas. The public was once more reminded that, despite the justices’ authority to adopt one, the Supreme Court is the only national court without an ethics code.

Now suppose, if the US Supreme Court rules in favour of Trump’s claims on a particular issue, there is a very real danger that many Democrats will not consider the decision as legitimate or even binding, regardless of the merits.

Also Read: Biden wanted to keep Abiy Ahmed out of the White House, he just stormed in

President Biden created a 34-member committee to study the distrust. In order to accomplish this, Biden formed a committee of 34 people. The committee’s size and ideological diversity made it improbable that it would reach consensus on any significant recommendations. The ensuing report, which was published a year ago, did not draw much public notice.

Well, the legitimacy crisis is Court’s own doing. Courts are expected to operate in accordance with laws and standards that deter abuse and boost public confidence. The Court does not have the same financial or military authority of the other branches, yet it does enjoy the public’s confidence and faith that the other branches will abide by its rulings. When the public regards the Court’s decisions as valid, it induces elected officials to adhere to them, even when they do not necessarily agree with them.

But, you can’t instill confidence in public with the archaic and out-dated functioning.