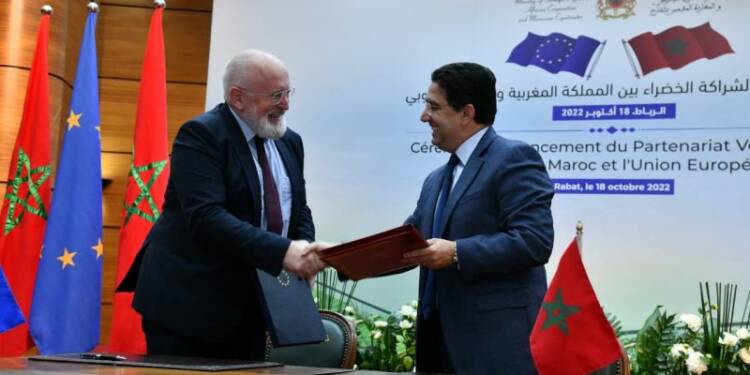 The West now has a new found love for Morocco.  However, this is for a reason. At a time, when Europe is going through its worst energy crisis and looking to reduce dependence on Russian imports, it needs Africa more than ever. Moreover, Europe’s plan to switch to clean energy also depends heavily on African resources.  Thus, now Europe is trying to grab these resources from wherever they can in Africa. This has led to Europe doling out incentives to Morocco in order to, what seems like a desperate attempt at, wooing the North African nation into its sphere of influence.

According to a new report by the European Investment Bank (EIB), harnessing Africa’s solar energy to produce 50 million tons of green hydrogen a year by 2035 can help in securing global energy supply, creating jobs, decarbonizing heavy industry, and transforming access to clean water.

Further, the study states Africa could make $1.1 trillion from the sale and use of green hydrogen.

The study by EIB, in conjunction with the International Solar Alliance and the African Union, highlighted the benefits of harnessing solar power to create green hydrogen in four African hubs: Morocco-Mauritania, southern Africa and Egypt.

Thus, now Europe wants to benefit from these vast opportunities that Africa has to offer, it has launched a charm offensive on Morocco to woo it into its sphere of influence. Let us discuss how.

It seems the West is now reaching out to Morocco in various ways with the aim of winning the country’s trust which it badly needs in the backdrop of Europe’s waning influence in Sahel.

Thus, it is now flooding Morocco with various aid and assistance programs.

Here are a few examples.

As per a report, Moroccan businesswomen will benefit from technical assistance of the World Bank Women Entrepreneurs Finance Initiative (WB We-Fi) program to access to new markets through e-commerce.

An agreement was signed lately in this regard by the WB officials with Moroccan ministry of  Trade & Industry, Morocco’s SME Agency and the Federation of Moroccan Chambers of Commerce, Industry and Services.

Due to the We-Fi program, Moroccan women entrepreneurs running very small enterprises (VSEs), SMEs or cooperatives will receive guidance coaching on how to create an online store, E- sale operations, learn about different online platforms and how to use them to reach customers to expand their businesses through e-commerce.

The two Moroccan villages, Ksar Elkhorbat and Moulay Bouzerktoune, have been chosen recently by the World Tourism Organization among the best tourism villages in the world in 2022.

This is not all. A memorandum of understanding relating to an investment project in the outsourcing sector was signed this week in Rabat between the Ministry of Digital Transition and the French Thales group.

Under the MoU, the French entity is committed to invest more than 350 million dirhams in the cybersecurity sector, through the establishment of a nearshore center to serve its customers internationally, which will create nearly 150 direct jobs with high added value.

Thus, Europe’s hunger for resources and influence has forced it to knock the doors of African countries with such sugar-coated offers.

Major economies like Germany in EU today are heavily dependent on African countries like Namibia for green hydrogen.

The pampering of Morocco by the West also comes at the backdrop of Algeria joining hands with Russia to increase its defense capabilities through partnership with Russia in the defense sector.

The West is known for mollycoddling other countries when it needs them for securing their own interests. Now, EU suddenly loves Morocco when it feels threatened by Russia’s rise in the Northern Africa after the Sahel region debacle. Now, the EU is trying its best to stop Russia’s rise in the region and it has chosen Morocco as its latest pawn in the great game of geopolitics.